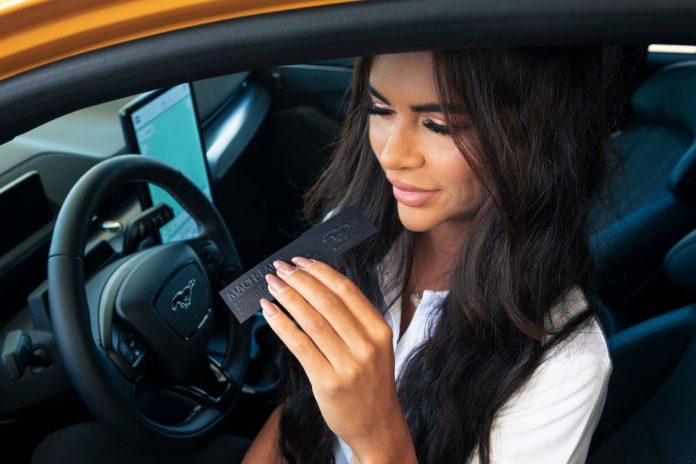 In a survey commissioned by Ford, one in five drivers said the smell of petrol is what they’d miss most when swapping to an electric vehicle, with almost 70% claiming they would miss the smell of petrol to some degree. More surprisingly, petrol ranked as a more popular scent than both wine and cheese, and almost identically to the smell of new books.

With that in mind, the Ford of Europe has created a premium fragrance for those who crave the performance of its Mustang Mach-E GT, but are still fond of the evocative smells of petrol-powered cars.

Called Mach-Eau, it’s the perfect scent for when customers have to plug their cars in to charge, because let’s face it, they won’t be visiting petrol pumps with their new rides. The new fragrance, which made its debut at the recent Goodwood Festival of Speed, “fuses smoky accords, aspects of rubber and even an ‘animal’ element to give a nod to the Mustang heritage.”

A lot of work went into developing Mach-Eau, and Ford didn’t just fill some bottles up with petrol and called it a day. As the carmaker explains, it worked with renowned fragrance consultancy, Olfiction, with ingredients that each add a specific element of the scent’s story.

Pia Long, an associate perfumer in the British Society of Perfumers, first looked into the chemicals that are emitted from car interiors, engines and petrol. This included benzaldehyde, which is an almond-like scent given off by car interiors, and para-cresol which is key in creating the rubbery scent of tyres.

These were blended with ingredients like blue ginger, lavender, geranium and sandalwood that added metallic, smoky and further rubbery accents. An “animal” element was also included, giving an impression of horses to underline the Mustang heritage.

“Judging by our survey findings, the sensory appeal of petrol cars is still something drivers are reluctant to give up. The Mach-Eau fragrance is designed to give them a hint of that fuel-fragrance they still crave. It should linger long enough for the GT’s performance to make any other doubts vaporise too,” said Jay Ward, director of Ford of Europe product communications.

Sadly, you won’t be able to order a bottle of Mach-Eau for yourself, but with the list of ingredients already revealed, there’s no stopping you from experimenting and cooking up a batch.

Kedah declares Jan 18 next year as occasional holiday for Thaipusam