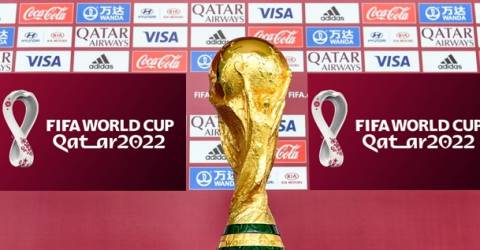 BERLIN: Four matches a day will be played in the group stage of the 2022 World Cup in Qatar with football governing body FIFA on Wednesday also revealing the stadiums for the opening game and the final.

The group stage will last 12 days and with all eight tournament stadiums in or close to the Qatari capital Doha, offers a unique opportunity, according to FIFA. Kick-offs will be at 1pm (6pm), 4pm (9pm), 7pm (12am) and 10pm (3am) with the final rounds played simultaneously at 6pm (11pm) and 10pm (3am).

“The tournament’s compact nature – with no air travel needed to move between the venues – will allow organisers, for the first time, to optimise specific match demands for the benefit and comfort of fans, teams and media,” FIFA said.

The 2022 World Cup has been steeped in controversy, with host nation Qatar hit with accusations of corruption over their bid for the tournament and slammed by rights organizations over the treatment of migrant workers.

Doha has repeatedly said that workers’ rights and conditions had improved after reforms were introduced, such as outlawing the Kafala system that tied a worker to their employer.

Qatar 2022 will be the last 32-team World Cup before the tournament expands to 48 nations for the 2026 edition held in Canada, Mexico and the United States. – dpa

8 Malaysian artistes aged 60 and above receive monetary aid from...