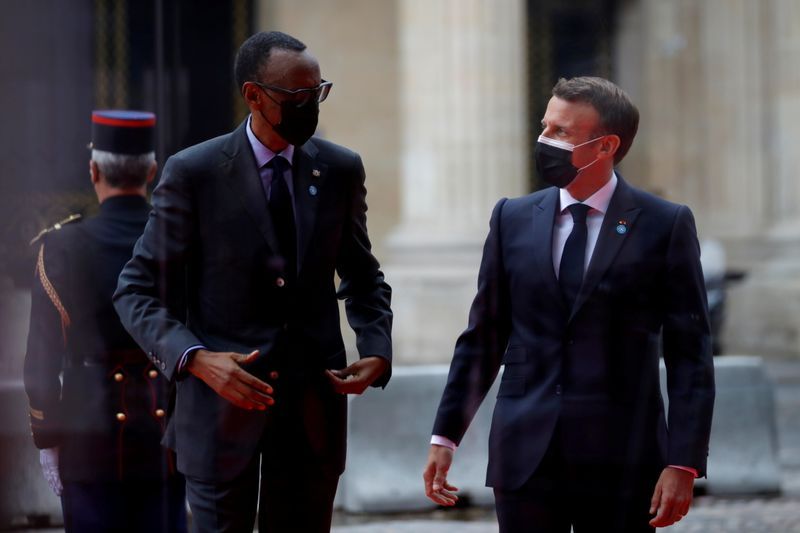 PARIS (Reuters) – French President Emmanuel Macron will name an ambassador to Rwanda, which for years accused Paris of complicity in its 1994 genocide, in a final step to normalise diplomatic relations between the two countries, the Elysee Palace said on Friday.

Rwandan President Paul Kagame, whose rebel army ended the three-month slaughter by death squads loyal to the then Hutu-led government, earlier this week said relations were on the mend after France accepted it bore a responsibility for the genocide.

Macron, who travels to Rwanda next week, wanted to mark “the final step in the normalisation of relations between France and Rwanda,” an Elysee official said.

The French president will make a speech at the genocide memorial in Kigali.

A commission established by Macron concluded in March that France had been blinded by its colonial attitude to events leading up to the genocide and bore “serious and overwhelming” responsibility. However, the nearly 1,000-page report absolved France of complicity in the killings.

“That means a lot,” Kagame said of France’s acceptance in an interview with France 24 on Monday.

Asked if an apology would be a further important gesture, Kagame responded: “I think so.”

Rwanda severed diplomatic relations with France in 2006 after a French judge issued arrest warrants against Rwandan officials accused of links to the shooting down of President Juvénal Habyarimana’s jet in April 1994.

Diplomatic ties were restored in 2009 during a phase of warmer relations between 2008 and 2011, but France has not had an accredited ambassador in Kigali since 2015, according to the French foreign ministry.