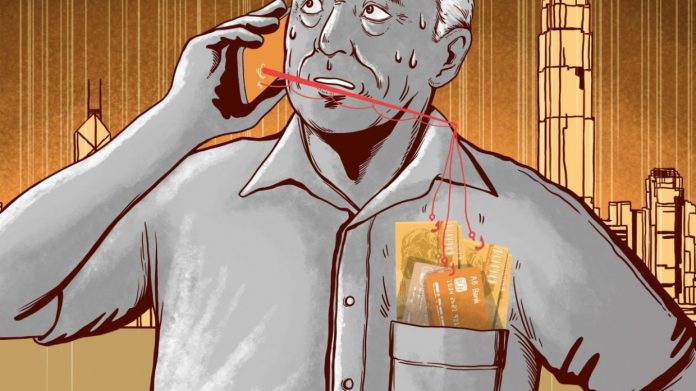 Senior Superintendent Neil Chan Tat-ming has never forgotten the 80-year-old man who reported being swindled out of more than HK$300,000 (US$38,460 or RM160,499) by a phone scammer claiming to be his son.

The veteran detective was stumped by the man’s reply when asked if he had contacted his son to check.

The victim’s only explanation was that the caller sounded so desperate begging for help to save a collapsing business, that the man fell for the con while fully aware he had no children. 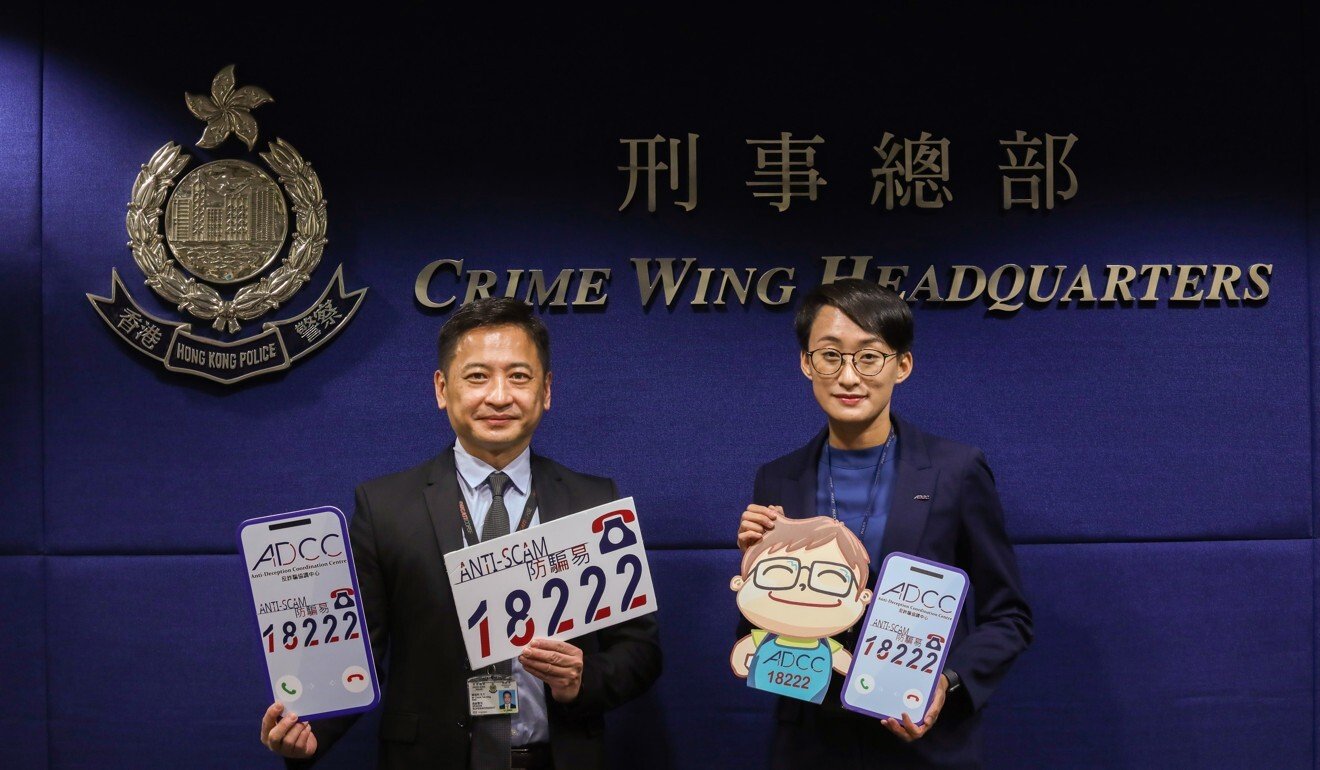 He followed the caller’s instructions and transferred the money, never to hear from him again.

“The old man could not explain,” Chan said. “He only said the scared ‘son’ sounded very anxious over the phone, and it made him feel agitated and petrified too.”

Advances in technology over the past decade have allowed fraudsters to work across borders with ease to target victims of all backgrounds, including the well-educated and tech-savvy.

In the first four months of this year alone, 304 victims reported being cheated out of HK$493mil (RM263.75mil) in phone scams.

He suggested setting up a dedicated unit to handle phone deceptions and since then, all such cases have been handled by the Kowloon East regional crime unit.

He never imagined phone scams would grow into a multibillion-dollar transnational enterprise. But 20 years later, more victims are turning up, and the sums involved are staggering.

Technology has made it easier for criminals to cover their tracks and avoid arrest.

“Successfully fishing one victim is like winning the jackpot,” Chan said. “What kind of business shows a profit of HK$250mil (RM133.74mil) in a single attempt?”

He was referring to the biggest incident which emerged in March this year, when a 90-year-old woman told police she was duped out of HK$250mil (RM133.74mil) after fraudsters claimed her identity had been used for criminal activity in mainland China.

Telephone scammers have proved to be creative fraudsters who work speedily, getting victims to set common sense aside as they become increasingly desperate to find a way out of an unexpected predicament.

The scripts have changed since the early days when victims frequently answered the telephone and heard the caller say: “Guess who?” As soon as they guessed, the fraudster impersonated the family member or friend and proceeded with the con.

“The call would start with ‘Hi Dad!’ The victim might reply saying, ‘Hey Wai! You haven’t come back for dinner recently!’” he said.

“The scammer then knew the son had not been around and would start fabricating a story to earn the victim’s trust. That was how the manipulation began.”

They accuse victims of being involved in money laundering on the mainland, or violating the national security law imposed by Beijing in June last year.

The scammers used mind games, said Vince Ho Wing-sze, a police clinical psychologist who has been studying the emotional traps set by phone fraudsters since 2017.

They exploit fear to trap their victims, then offer relief if money is sent to them.

“A person gets terrified when threatened with possible arrest,” Ho said, adding that people tended to believe officials or law enforcers.

“The con artists then offer hope and help, making the fearful victim feel relieved, earning trust and dependence. The victim won’t hang up.” 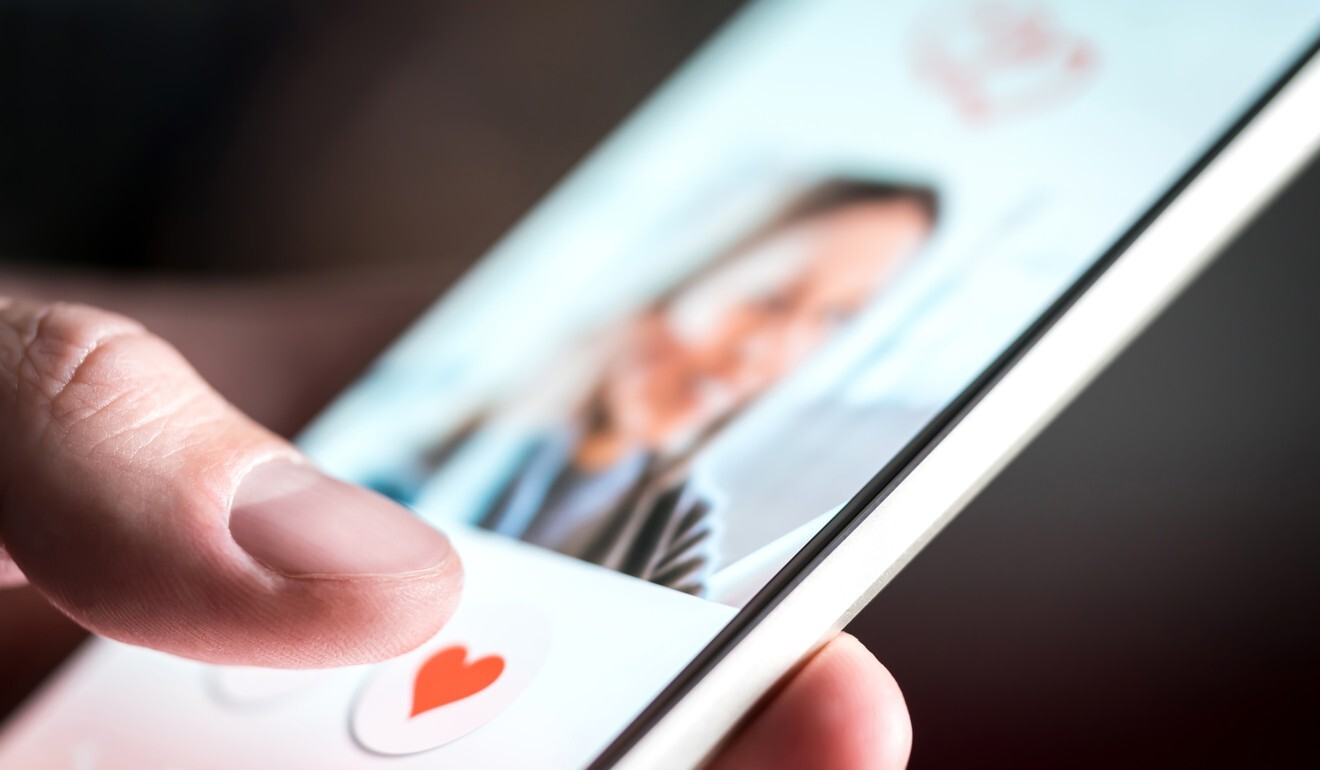 The use of smartphones over the past decade has allowed culprits working in syndicates to divide the work and trap victims.

One caller will pretend to be a mainland official accusing the victim of breaking the law, demanding personal information to be verified. Another will make fake arrest warrants or court warrants to send over the phone, making it all seem more real.

After threatening the victims over an alleged crime, they offered help by saying: “I believe you didn’t do it. Probably someone stole your personal information. I can help you, but you have to cooperate.”

Culprits acted speedily to create a sense of urgency, asking victims for security deposits or their bank account password for investigation.

‘I was stupid back then’

Retiree Chan, 71, who is childless and lives alone, was shocked when a caller identified himself as a mainland official in April and accused her of breaking the national security law.

The caller knew her Hong Kong identity card number, and accused her of money laundering, too. When she began asking questions, the caller said she could prove her innocence by transferring her savings of HK$9mil (RM4.81mil) to a new bank account while investigations proceeded.

“They said they were very powerful and could appear at my doorstep within two hours,” said Chan, who asked to be identified only by her surname.

She was in touch with the tricksters for a week, during which she did not find them threatening. To persuade her, they even transferred more than HK$40,000 (RM21,400) to her as “compensation” for her trouble helping with investigations and to buy a new phone with which to communicate with them.

Chan would have lost her savings but her bank alerted police in time.

“I was stupid back then,” she said afterwards. 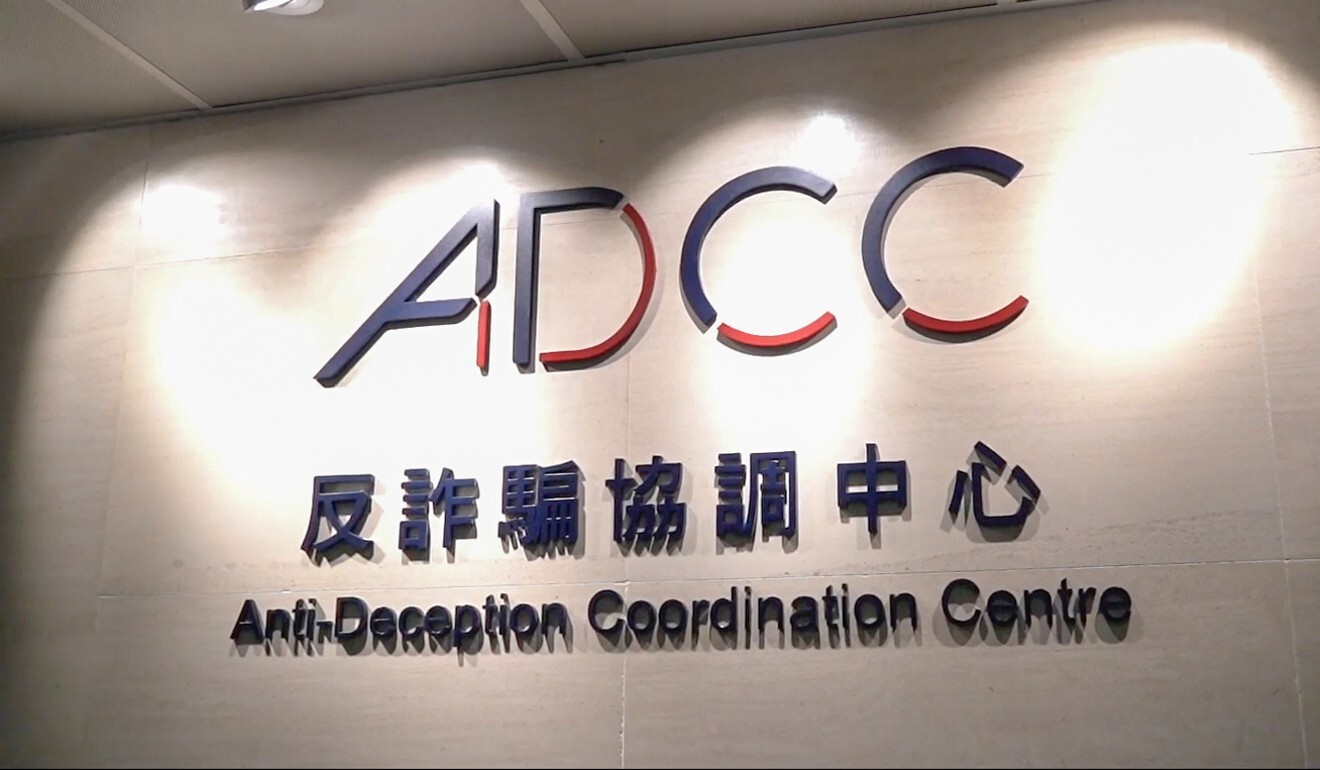 Ngan recalled another woman, aged 67, who reported to police only in April this year that she transferred HK$4mil (RM2.14mil) to scammers in January 2019.

That was after a caller claiming to be a mainland official accused her of breaking the law across the border and demanded she transfer her savings for investigations to proceed.

The fraudsters warned her to remain silent because there was a court order to keep the matter confidential.

The woman, who distributed newspapers on the street, kept her secret until April this year, when her husband received a similar call.

Ngan said: “She asked him to hang up immediately or they would be in deeper trouble, as she has been under investigations by mainland officials for more than two years.”

The shocked man took his wife to the police station to make a report.

Ngan said she asked the woman why she believed the con men. The woman replied that some time after her money was gone, she was distributing newspapers in the street when two men came up to her and took her photo.

“She was scared, thinking she was being tailed by officials. She did not dare tell anyone believing there was a court order,” Ngan said.

The victims have changed over the past two decades.

At first, they were mainly housewives, retirees and old people who answered the telephone at home, Chan said. With the widespread use of smartphones and social media, the victims have become younger.

An analysis of 108 victims in September 2016 found 45% aged 30 and below, a quarter were 60 or above, and 48 were new immigrants or temporary residents studying in Hong Kong.

The picture remained much the same when police analysed 117 victims who reported losing HK$104mil (RM55.64mil) in April this year.

Ngan said the victims included many well-educated individuals who were graduates of top mainland universities.

She said the better educated often felt compelled to clear their names when callers made allegations against them.

“They knew they didn’t break the law,” Ngan said. 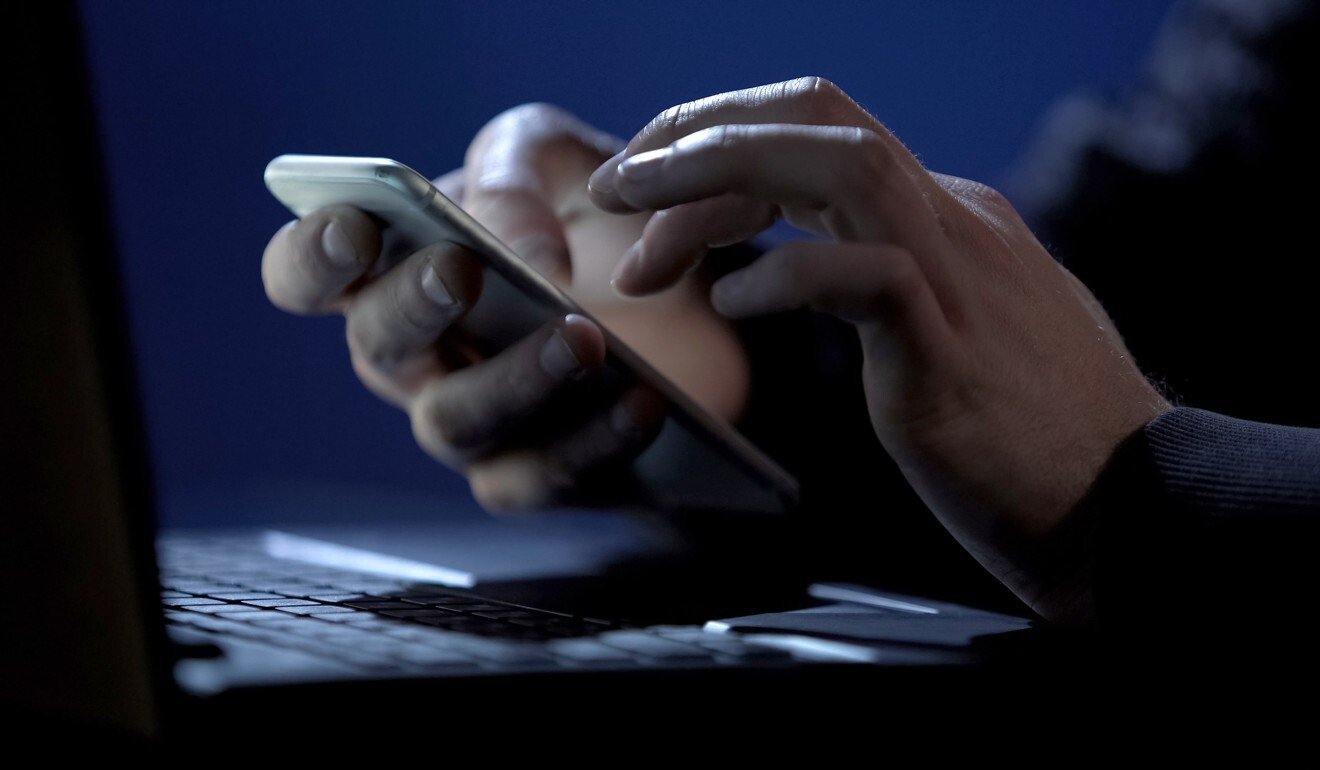 The fraudsters torture their victims for days, starting with pre-recorded messages that lure them to listen, before “officials” turn up making allegations or various threats.

As they become more afraid, the victims ask themselves: “Why me?” Then, in trying to prove their innocence, they end up falling for the con.

Last August, a 27-year-old financial analyst was accused of money laundering in Shenzhen. He knew it was untrue, but surrendered his e-banking password and address to culprits who transferred US$940,000 (RM3.90mil) out of his bank account.

In that case, police arrested a 20-year-old university student, who once went to the victim’s home, showed him an arrest warrant from mainland officials and took his SIM card.

The female student told police she was a victim herself, and claimed she was acting on the scammers’ instructions when she went to the man’s home and took his phone card.

“It is more difficult for intelligent people to get out of traps, because they think they can handle the matter themselves without seeking help from others, until they run out of money,” Ho, the psychologist, said.

‘Spot the signs, stop the crimes’

Phone scams are a major part of a longer list of crimes of deception that have risen in Hong Kong over the past 15 years.

At the same time, however, reported deceptions of all kinds more than doubled from 7,260 in 2016 to 15,553 last year and accounted for a quarter of the overall crime figures for 2020.

In the past five years alone, victims reported losing more than HK$13bil (RM6.95bil).

Ngan said most victims who called police complained about phone swindles, followed by those who fell for online love scams. 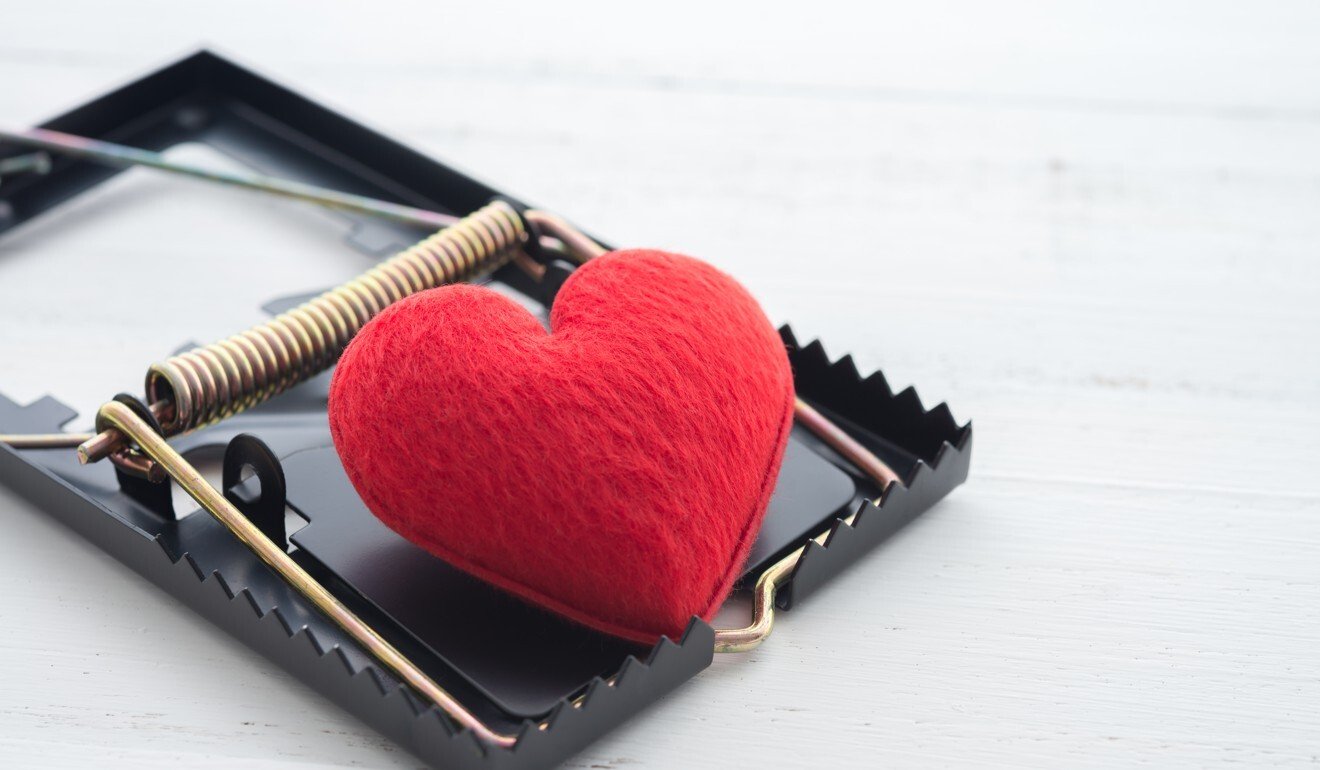 Chan said he believed the number of scams, especially phone fraud, would be much higher if not for a publicity blitz since 2015, when phone deceptions surged to a record high of 2,880 cases involving HK$317mil (RM169.59mil).

Using social media and advertisements, police have made a determined effort to provide information on the modus operandi and changing tactics of con artists.

The force has worked with telecoms companies, banks and remittance agencies to raise the level of alertness to tactics used by fraudsters and identify potential victims as early as possible.

Since 2015, for example, the Office of the Communications Authority has required the insertion of the +852 prefix for incoming calls originating outside Hong Kong to help the public spot fraudulent ones.

Despite intensive efforts, cases of deceptions of all kinds have continued rising.

Disagreeing that the publicity failed, the senior superintendent said an untold number of potential victims could have hung up on scammers because they were aware.

“Nowadays swindlers can make 100,000 calls a day,” Chan said. “Maybe only a few hundred people fall prey. A decade ago, scammers might successfully fish 900 victims out of 1,000 calls.”

As of March this year, the Anti-Deception Coordination Centre’s 24-hour anti-scam helpline, 18222, had received more than 80,000 inquiries and foiled 1,012 suspected scams.

Between 2008 and last year, Hong Kong police arrested only 291 people responsible for 377 phone deception cases. Of that total, 172 cases proceeded to court, with the culprits jailed for between 17 months and more than five years.

Ngan said it was hard to track down the phone scam masterminds as they operated outside Hong Kong’s border. People arrested were mainly those who took money from victims face to face or sold their bank account details.

Last year, more than 21,500 people were arrested worldwide and almost US$154mil (RM640.02mil) seized during a year-long investigation led by Interpol to crack down on telecoms fraud and other scams.

Undersecretary for Security Sonny Au Chi-kwong told Hong Kong lawmakers in June that police were exploring the use of technology to provide automatic alerts to victims on possible scam calls, emails and messages.

Chief Inspector Ngan said people could do more to protect themselves from being tricked.

“Spot the signs. Stop the crimes. Hang up on pre-recorded calls and do not pick up any calls with numbers starting with +852,” Ngan said.

“It is always some actions of ours that enable scammers to get away with the money.” – South China Morning Post