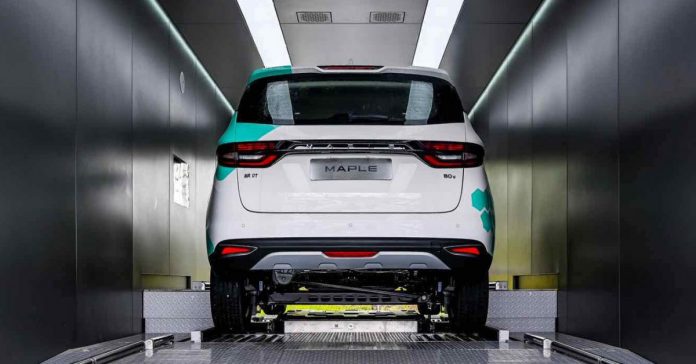 Like many other electric vehicle platforms, the Sustainable Experience Architecture (SEA) by Zhejiang Geely Holding Group (Geely Holding) has its battery pack integrated into a skateboard chassis. This is preferred because it allows for a flat floor that maximises interior space, and placing the heaviest component in an electric powertrain close to the ground helps lower the centre of gravity.

While these traits are pretty common among EV platforms, battery swapping technology is not something that is as widespread, and the SEA is no exception. As such, vehicles based on said platform must still be plugged in to get the battery back to a full charge.

So, why didn’t Geely opt to include battery swapping into the design of the SEA? To find out, paultan.org posed the question to Kent Bovellan, the chief engineer for the SEA architecture at Geely Auto Group, during a group interview recently.

“First of all, I thought of the integrated battery solution because I was going for the lightest architecture possible depending on the size of the vehicle. So, I chose the integrated way with the SEA. Geely also studied battery swapping but you are very locked down in terms of dimensions and I don’t think swapping will be really big until we get standards,” said Bovellan. “You can think of all EVs, for charging, they have different connectors, what a mess it will be. Every company have to put up their own charging facilities. It’s exactly what will happen with swapping. If we don’t have standards, everyone will have to built their own stations and have their own batteries in each station… it will be a mess,” he added.

However, while the SEA platform doesn’t have battery swapping built-in, the company isn’t abandoning the idea completely. The company sees the potential of the technology, which Geely Technology Group demonstrated last year with the Maple 80V, a fully electric version of the Jiaji MPV that is based on the CV platform.

There are benefits to battery swapping, with the most obvious being the speed at which drivers can get a fully charged battery to use. One of the main drawbacks of EVs is the time it takes to charge the battery at a charging station, which can take several minutes. Even with fast charging technology, it can never be as fast or efficient as refilling at a conventional fuel station, so battery swapping is seen as a viable alternative.

By simply swapping the battery out like you would a remote control, it means drivers can get back on the road sooner rather than having to wait for a usable amount of range. Out of sight will be what happens after a swap, as the station will recharge the depleted batteries so that they can be used on the next vehicle that is low on juice.

Additionally, battery swap stations can be easily set up safely in any location, particularly in places where high-voltage infrastructure, which can be expensive, is not readily available. This also makes it a good option for those who own EVs, but reside in apartments that may not have necessary charging facilities.

Geely says a swap costs around 55 yuan (RM35) to fully replenish an EV’s full NEDC range of around 400 km. That sounds pretty reasonable from a consumer standpoint, but rolling out the technology does have its hurdles, including requiring a common standard as Bovellan explained. There’s also the matter of the resources needed to store, charge, maintain and move batteries around, as well as a high capital requirements.

While Geely is dipping its toes into battery swapping technology, Nio has already made it a key selling point of its vehicles for some time. In March this year, Nio announced it has deployed 193 stations that offer the service and completed two million battery swaps.

Both companies are in agreement that with swappable batteries, the battery as a service (BaaS) model – think of it as buying an EV with “batteries not included” – encourages the adoption of EVs. Given that batteries make up a big chunk of an EV’s cost, separating that cost from the cost of the rest of the vehicle can make EVs more attractive in terms of pricing. As an example, the latest ET7 is cheaper with a BaaS subscription than without one.