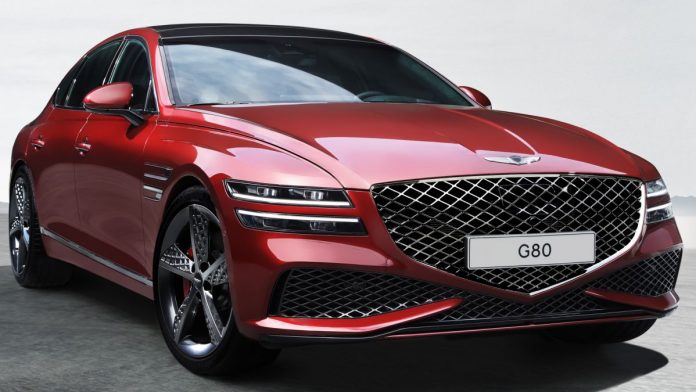 With the third-generation G80 (née Hyundai Genesis) now in its second year on sale, Genesis has realised that it’s time to push out new versions of its executive sedan. The latest model to come from Hyundai’s luxury offshoot is the G80 Sport, a sportier-looking variant that adds a bit of spice to the mix.

The car is differentiated from lesser models via a redesigned three-dimensional wing-shaped front bumper that cuts into the lower air intake, giving a more aggressive look that’s enhanced by the darkened headlight internals. Along the side, the 20-inch dark chrome alloys – which echo the G-Matrix pattern of the grille – hide brake callipers painted in either red or black depending on the engine chosen.

Moving to the rear end, the revised rear bumper features fake vertical vents and a re-profiled diffuser with a body-coloured insert, housing twin exhaust pipes that mimic the shape of the Crest Grille. The chrome trim around the grille, front intake, side strips and rear bootlid have all been darkened, while an exclusive new Cavendish Red body colour has been added to the palette. Inside, the G80 Sport is upholstered in leather finished either in black with grey or red stitching or in Seville Red. Buyers can also choose from two new stitching patterns for the seats – quilted or chevron – and select dashboard trims made from aluminium, carbon fibre or a diamond hybrid weave. There’s also a unique three-spoke steering wheel that replaces the standard four-spoke item.

The changes to the Sport model are more than just skin-deep – the chassis has also been retuned for greater agility and high-speed stability and has been upgraded with Genesis’ first rear-wheel-steering system.

No changes to the powertrains have been outlined so far, but just as a refresher, the G80 is available with either a 304 PS/422 Nm 2.5 litre turbocharged four-cylinder engine, a 380 PS/530 Nm 3.5 litre twin-turbo V6 and a 210 PS/441 Nm 2.2 litre turbodiesel. All three are mated to an eight-speed automatic gearbox with a choice of either rear- or all-wheel drive. The reveal of the Sport variant comes hot on the heels of a 2022 model year revision of the greater G80 range. The changes include the addition of the previously driver-only pneumatic Ergo Motion Seat function for the front passenger, a Smart Posture Control System II for adding hip and back support on long journeys, and an available rear wireless smartphone charging pad.

Safety has also been upgraded, with the lane change assist now incorporating a one-touch function and a two-second hold feature (in case there is another car preventing the system from performing a lane change immediately). Traffic sign recognition is also now fitted as standard, while augmented reality navigation has been improved with automatic switching and revised direction and destination displays.