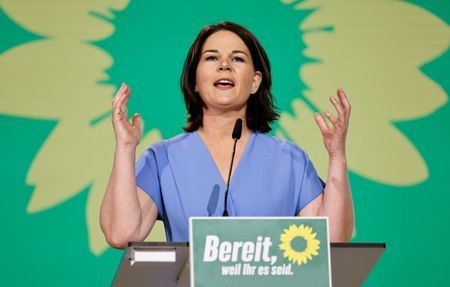 BERLIN (Reuters) – A German business lobby group on Tuesday defended a controversial campaign in which it portrays Greens chancellor candidate Annalena Baerbock dressed as a biblical Moses, holding two tablets under the caption “Annalena and the 10 bans.”

In its campaign, lobby group INSM attacks the Greens’ policies to steer Germans into electric cars and onto trains instead of domestic flights. But its portrayal of Baerbock as Moses has met criticism and accusations of anti-Semitism.

The Greens, aiming to win the chancellery for the first time at a Sept. 26 federal election, surged ahead of Chancellor Angela Merkel’s conservatives in polls in late April after they picked Baerbock as their candidate to run for chancellor.

Baerbock has since faced repeated attacks online, including a picture supposedly showing her naked that flooded social media. The picture was in fact that of a Russian glamour model.

The June 10 campaign post on INSM’s website runs under the banner, “Why we don’t need a state religion”, and continues: “Green prohibitions don’t lead us to the promised land.”

INSM, which has financial support from the metal and electrical industry, has kept the post on its website despite criticism in German media about its depiction of Baerbock, a 40-year-old London School of Economics alumni and a mother of two.

“The strongest accusation is that we are serving anti-Semitic conspiracy myths with the motif of the Moses depiction. We firmly reject this,” INSM said in a statement published on its website on Tuesday.

“If we have hurt personal or religious feelings with the advertisement, we regret this and assure you that this was in no way intended,” it added. “The INSM will continue to stand up for the social market economy in a decisive and clear manner.”

At a weekend conference to agree the Greens’ election manifesto, Baerbock said the party would seek to support German industry in cutting carbon emissions by ensuring the state helps meet any additional costs companies incur.

Baerbock lost her thread at one stage during a speech to the conference and, on leaving the stage, muttered a profanity when her microphone was still live.

The stumble followed what the Greens leaders have conceded has been a difficult few weeks, marked by a regional election setback, a bonus payment scandal and a controversial suggestion that Germany should arm Ukraine.

An INSA poll published on Monday showed support for the Greens slipping to 19.5%, behind Merkel’s conservative alliance on 27.5%. Merkel is not seeking re-election in September.

Ukrainian refugees hope for peace, but more expected to flee

US election 2020 results live: Joe Biden narrowly ahead of Donald Trump as count...