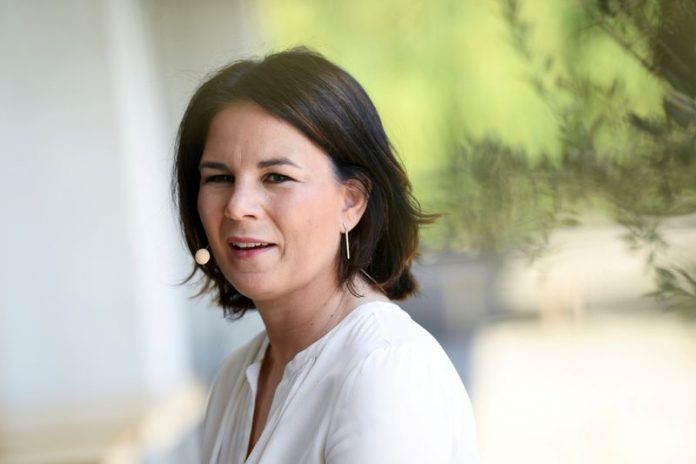 BERLIN (Reuters) -The leader of Germany’s Greens on Thursday dismissed plagiarism allegations made against her as she tried to reinvigorate her flagging campaign three months before an election in which she aims to succeed Angela Merkel as chancellor.

The Greens surged briefly in polls after picking Annalena Baerbock in April as their candidate to run in a Sept. 26 vote. However, a regional election setback and scandals over a Christmas bonus payment and details of her resume have hit the party’s support.

Compounding their problems, a website that investigates plagiarism this week said Baerbock, 40, had lifted phrases from other texts without citing them in her new book which sets out her political ideas.

In a wide-ranging interview for woman’s magazine Brigitte, Baerbock said she had not written a scholarly work with footnotes, but that her book was a compilation of her political experiences and views.

“I wrote what I want to do with this country and described the world as it is with facts and realities,” she said. “It is not true that there was a copyright breach and we said this clearly.”

The party had earlier this week rejected the accusations and hired a prominent libel lawyer. A party spokesperson has said Baerbock was being subjected to a character assassination.

An INSA poll for Bild daily showed on Thursday that only 23.2% of those asked thought Baerbock was credible, compared with 58.4% who deemed her not credible.

Most polls now put Merkel’s conservatives 8-10 percentage points ahead of the Greens. Depending on coalition arithmetic after the election, the two blocs may end up joining forces in a coalition to run Europe’s biggest economy.

Baerbock, who has also faced ridicule over an online picture purportedly depicting her naked but was actually that of a Russian glamour model, has said she is annoyed with herself for making some mistakes, for example with her resume.

However, while making clear that she was ready for a tough election fight, she said “There are some campaigns that have nothing to do with a political argument.”

Baerbock said the first thing to do if she becomes chancellor would be to introduce a climate protection programme.

Locals mystified by sudden appearance of red fireball in the sky

Mara issue: Five officers to give statements on Friday (Feb 11) at MACC HQ