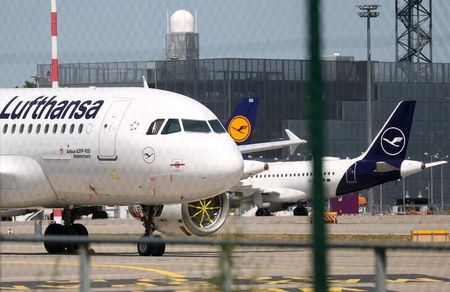 BERLIN (Reuters) -Flights between Russia and Germany were briefly suspended on Tuesday after Russia declined to renew Lufthansa’s permit to fly to Moscow on time, prompting a tit-for-tat response from Berlin.

Frankfurt Airport’s website showed two flights, one operated by Lufthansa and one by Russia’s Aeroflot, had been cancelled on Wednesday, though an evening Lufthansa flight to Moscow was listed as having departed.

“Russian authorities have issued permission for passenger flights to Russia in June,” Lufthansa said in a statement. “Scheduled Lufthansa flights to Moscow and St. Petersburg can therefore proceed.”

The dispute followed European Union moves to stop Russia-bound flights from crossing Belarusian air space after Minsk used an apparent fake bomb threat to force an intra-EU flight to land and then arrested a dissident journalist on board.

The German transport ministry said it had responded after Russia’s aviation authority FATA failed to renew Lufthansa’s flying rights for June on time, meaning a flight that had been due to depart early on Wednesday had to be cancelled.

“On the basis of standard reciprocal practice, the Federal Aviation Office has not provided any further approvals for flights by Russian airlines,” the ministry said earlier on Wednesday, adding that it would allow Russian airlines to resume flying as soon as Lufthansa routes were approved.

Lufthansa did not say whether or not the resumption of its service to Moscow on Wednesday evening meant those flights were now avoiding Belarusian air space.

Ditching Instagram would free up 20 minutes a day for Vestager

US Open: Serena Williams’ career over after Ajla Tomljanovic defeat