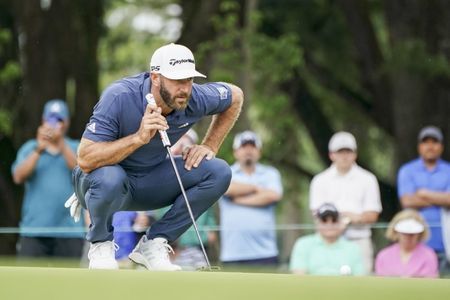 SAN DIEGO, Calif. (Reuters) – Dustin Johnson may have missed the cut at the last two majors but the world number one said on Wednesday he still likes his chances at this week’s U.S. Open so long as he can control his driving at Torrey Pines.

The U.S. Open prides itself as being the toughest test in golf and this week should live up that billing given the thick rough that lines both the narrow fairways and green complexes at the par-71 layout.

“If I can drive it well, I feel like I’m going to have a really good week,” Johnson told reporters. “Fairways are pretty narrow. The course is long … and if I can hit the driver good, yeah, I like my chances.”

Johnson, who vanquished the demons of near misses at the majors with his 2016 U.S. Open triumph at Oakmont, has plenty of experience at Torrey Pines but has not exactly thrived on the layout that sits atop the cliffs overlooking the Pacific Ocean.

The long-hitting American made his major debut at Torrey Pines for the 2008 U.S. Open, where he finished 48th, and has just one top-10 finish in his nine appearances at the regular PGA Tour event held there.

Johnson, who finished in a share of 10th place in his only U.S. Open tune-up, said he does not expect there to be much room for error this week on a course that puts a heavy premium on long and accurate drives.

“Depending on the hole, there’s places where you can miss, but a lot of times when you’re in the rough, especially if it’s a long hole, I don’t see you getting it to the green,” said Johnson, who won his second major at the Masters last November.

“Or if you get lucky and get a good lie, obviously you can get it up around the green or on the green, but for the most part, what I’ve seen is a lot of just chip it down the fairway.”

Noh and Mohamad sworn in