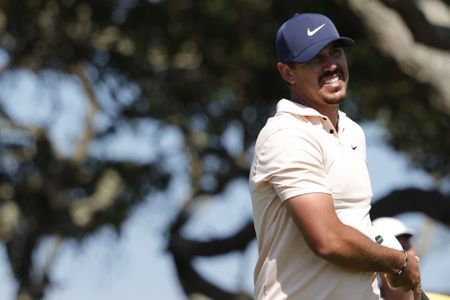 (Reuters) – Brooks Koepka may not have had the ideal tune-up for next week’s U.S. Open but the four-times major champion said on Friday his missed cut at the Palmetto Championship at Congaree is more to do with a lack of focus than the state of his game.

World number eight Koepka, in his first event since a runner-up finish at last month’s PGA Championship, carded a two-over-par 73 in the second round in Ridgeland, South Carolina, that left him at three over on the week.

Koepka, who had knee surgery in March to repair a dislocated kneecap, said he struggled with focus all week as his mind was already looking ahead to the June 17-20 U.S. Open at Torrey Pines.

“I struggled with focus out here because my mind’s already kind of going to next week and thinking about everything I need to do there,” Koepka, who counts two U.S. Open wins among his four major victories.

“I mean, that’s probably where I think some of the poor scoring comes from, just from lack of focus.

“But as far as commitment to the shot, striking it well, doing what I want with the ball, flighting it, I’m pretty pleased. I’m excited for next week, and hopefully it goes well.”

The PGA Championship at Kiawah Island marked Koepka’s third event in three months and while he held the outright lead after the opening hole of the final round he ultimately finished two shots behind winner Phil Mickelson.

After that runner-up finish, Koepka said his surgically repaired right knee got dinged a few times by people in the crowd who swarmed the 18th fairway as he and Mickelson made their way to the green.

Koepka said his knee was not an issue this week but did avoid putting too much strain on it with the year’s third major just around the corner.

“It’s in a really good spot. I like where it’s at. I’ve done enough rehab, strength’s coming around. I mean, I can almost squat down to read a putt like normal,” said Koepka.

“Didn’t do it too much this week just because I don’t want to screw it up for next week.”

(Reporting by Frank Pingue in Toronto; editing by Richard Pullin)

Can House Of The Dragon Overcome Its Last Jedi Problem?