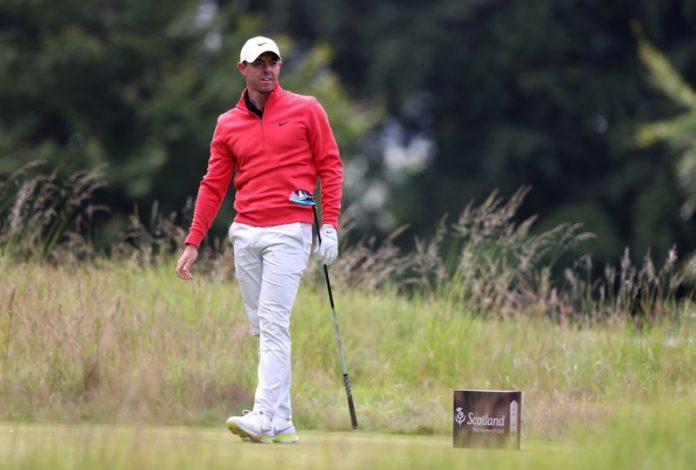 (Reuters) – Rory McIlroy’s second round at the Scottish Open got off to a bizarre start on Friday when a spectator came to the tee and took a club from his golf bag.

A video https://twitter.com/IrishGolferMag/status/1413428425461747712 circulating on social media showed a man confidently strolling across the tee area at The Renaissance Club, removing the distinctive headcover from McIlroy’s driver and then returning to draw another club from the bag.

McIlroy and his caddie, Harry Diamond, along with playing partner Jon Rahm looked on in disbelief as the spectator was preparing for practice swings at the tee.

A European Tour spokesperson said the spectator “was escorted from the tee by security personnel and the matter is now in the hands of Police Scotland.”

After shooting a second round of 71, four-times major winner McIlroy was not too keen on discussing the incident, but did say: “I was surprised. Everyone saw what happened on TV.

“It was handled efficiently and everything was OK. I had no idea who it was.”

While the incident sparks concerns over maintaining safe distance between fans and players in the current environment, world number one Rahm was quick to see the funny side.

“He came in so confident and we thought he was going to take a picture or something. We thought he was maybe part of the camera crew or a photographer,” said Rahm, who set the early clubhouse target with a 65 to go 11-under overall on day two.

“Me and Rory didn’t say anything. He was holding a six iron and I didn’t want to get hurt.

“It didn’t put anyone off. If anything it put a smile on our faces. It will be a pretty good story to tell in the future.”

A Police Scotland spokesperson said a 35-year-old man had been taken to hospital in Edinburgh and that “enquiries are ongoing.”

Four of the world’s top five players are part of a star-studded field at the Scottish Open, which is the first golf tournament in Britain to admit spectators since the start of the COVID-19 pandemic last year.

Around 4,000 fans are permitted into the course each day, while eight times that number will be at the Royal St George’s for the British Open next week.

Musk says he would reverse Twitter ban on Donald Trump