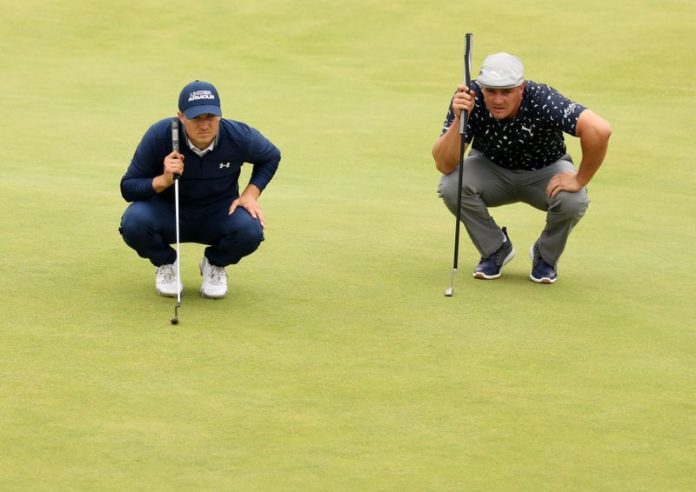 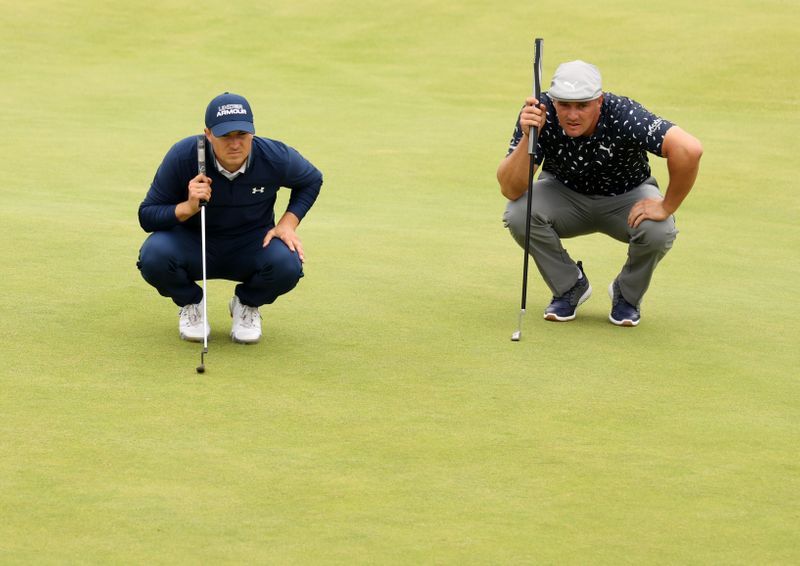 Spieth, who claimed the Claret Jug at Royal Birkdale in 2017 but whose form has slumped, recovered from an early bogey to card a five-under 65 — producing a beautifully controlled round in a moderate breeze around the Royal St George’s layout.

Playing partner DeChambeau crunched some trademark monster drives but unfortunately too many of them did not go where he intended and he was often chopping out of thick rough on his way to a disappointing one-over 71.

DeChambeau never quite got things going until three successive birdies on the back nine but a wild tee shot on the 15th left him in knee-deep hay and it cost him a bogey.

The 2020 U.S. Open champion launched another huge drive on the 17th but a poor approach shot ended with a three-putt bogey while another rip-roaring tee shot on the 18th and deft chip should have earned him a birdie but he slid a putt past.

It was all a bit underwhelming for the flat-cap wearing giant and the galleries who had followed the group expecting fireworks were left admiring the craft of Spieth.

Spieth had the world at his feet in 2017 when his British Open title meant he joined Jack Nicklaus as the only player to win three of golf’s four majors before the age of 24.

Since then it has been a struggle and he ended 2020 in 82nd place in the world rankings.

There have been encouraging signs though that the former world number one is emerging from the slump this season as he tied for third at the Masters a week after winning the Texan Open — his first Tour title since his Royal Birkdale triumph.

Spieth found 64% of fairways on Thursday and putted tidily although he looked disappointed to miss a birdie opportunities on the 17th and 18th but the omens look good as he matched his opening-round 65 at Royal Birkdale.

After last year’s Open cancellation because of the pandemic, Spieth said it was great to be back and playing on a course he described as “a really fun kind of cool, tricky track.”

“I came in here and I’ve been in a really good mood about it,” Spieth told reporters. “I think the Open brings a lot of the feel aspect into the game. You’re less swing-focussed here and more shot-focussed.

“The second you take your brain off the shot you’re hitting you may not find your ball.”

DeChambeau said in the build-up that his length could be an advantage this week if he could stay out of the ‘hay’ but he left the driver in the bag on occasions during his first round.

He did just that on the opening hole but his iron was errant and he ended up with a bogey.

After that it was a mixed bag with his driving accuracy down below 30% — hardly a recipe for making an impression at a tournament in which he has missed the cut in two of his three previous appearances.