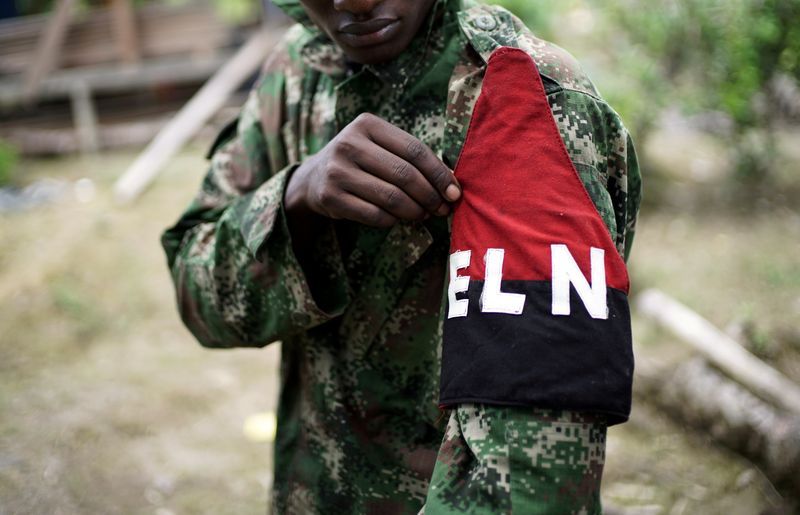 CARACAS (Reuters) – Soon after rebels from neighboring Colombia arrived in this Venezuelan village, they started choosing students from the local high school to harvest coca, the plant used to make cocaine, the school’s principal told Reuters.

Four years later, these foreigners from the National Liberation Party, or ELN, function as both a local government and a major employer in this town in the northwestern state of Zulia, according to the educator and 14 other residents. All spoke on condition of anonymity and asked that their community not be named because they feared retaliation.

The guerrillas pay villagers, including children, to staff narcotics operations, extortion rackets and wildcat gold mines in both countries, the people said. Colombian security officials say the criminal proceeds are financing the guerrillas’ long-running insurrection against the Colombian government. The group’s recruiting, the residents said, has intensified over the past year as the coronavirus pandemic has deepened misery in Venezuela, where the economy was already reeling from years of hyperinflation and shortages.

When the armed Colombians first arrived, the villagers said, they were flanked by local Socialist Party community leaders and proclaimed they were there to bring security with the blessing of President Nicolas Maduro.

But their brand of law and order, the people said, quickly morphed into tyranny. The Colombians forbade residents from sharing information about the group’s activities, set a strict 6 p.m. curfew, outlawed firearms and controlled who entered the town, the villagers said.

The rebels also brought money. As they tapped pupils to work the coca fields, they offered to “paint the school, fix the lights or whatever we needed,” the principal said in an interview. In 2020, with school enrollment already declining as hungry families fled the country, more than half the remaining 170 students left with the ELN, leaving just 80 kids in class, she said.

The Colombian government has long claimed Venezuela’s leadership grants safe harbor to anti-government Colombian rebels, and that Caracas allows cocaine to move through its territory for a cut of the profits. Maduro has denied the drug-trafficking accusations but expressed sympathy for the rebels’ leftist ideology and openly welcomed some guerilla leaders.

Venezuela’s Information Ministry did not respond to requests for comment about the guerrilla group’s activities in the country.

Pablo Beltran, the ELN’s second in command, denied the group is involved in cocaine production, drug trafficking or other illicit activities, or that it recruits Venezuelans to work in such operations. He told Reuters the group does charge fees to criminal drug groups entering territory it controls in Colombia where coca is cultivated. He acknowledged that poor Venezuelans driven by their nation’s economic crisis do work in those areas, but he said they are not paid by the ELN.

Beltran said the ELN does cross into Venezuelan territory, but the group’s policy was not to have a permanent presence there. He also denied the ELN was present in Venezuela with the blessing of Maduro.

“I hope we have his moral support,” Beltran said. “But the day they perceive there is a force like ours stationed there, they are not only losing sovereignty, but they are violating their constitution.”

This account is based on interviews with more than 60 Venezuelans – including pastors, ranchers and teachers – living in six states near the Colombian border. Reuters also spoke with lawmakers, human-rights activists, indigenous leaders, former Venezuelan military officers, two rebel defectors, and U.S. and Colombian authorities familiar with the rebels’ growing control of the region.

The interviews reveal a portrait of areas being transformed by armed Colombians taking advantage of Venezuela’s decline. Rebels who once hid from Colombia’s military in Venezuela’s jungles have moved into population centers, ruling alongside Maduro’s government in some places, supplanting it in others, residents of these areas said.

For a graphic on Venezuelan border states:

They are mainly ELN guerrillas and former fighters from another rebel group, the Revolutionary Armed Forces of Colombia, or FARC, according to residents and internal Venezuelan intelligence documents viewed by Reuters. These combatants reject the landmark 2016 peace deal reached between the FARC and the Colombian government. The FARC dissident groups could not be reached for comment.

More than 1,000 members of the ELN alone are operating in Venezuela, Colombia’s then-Foreign Minister Carlos Holmes Trujillo told the Organization of American States in 2019.

The rebels have filled gaps in Venezuela’s crumbling institutions, handing out food and medicine, even approving infrastructure projects in some areas, villagers told Reuters.

Many said the rebels’ presence had reduced street crime. But all the locals who spoke to Reuters said they feared these armed combatants. A villager in a different Zulia town likened living under ELN rule to “living in a prison with eyes always watching.”

One 16-year-old high-school dropout from outside the once-prosperous oil city of Maracaibo, Zulia’s capital, said he worked 12-hour shifts at an ELN coca farm, picking leaves until his hands bled. Still, the boy said, he gets three meals a day and makes the equivalent of $200 USD a month, a fortune in much of Venezuela.

After Maduro’s predecessor Hugo Chavez came to power in 1999, the FARC and ELN were allowed to operate more openly inside Venezuela, according to former Venezuelan officials, residents, analysts, U.S. and Colombian authorities and former guerrillas.

What began as an alliance of like-minded revolutionaries, with common foes in the Colombian and U.S. governments, has morphed into a criminal partnership centered on drug and gold trafficking and other illicit schemes, according to Bram Ebus, who has reported on guerilla activities in Venezuela for the International Crisis Group, a Brussels-based think tank. These enterprises have become financial lifelines for the guerrillas and for Venezuelans stretching from small villages to the corridors of power in Caracas, Ebus, eight former Venezuelan military officers and two former members of FARC dissident groups told Reuters.

In March 2020, the U.S. Department of Justice indicted Maduro for allegedly heading a drug trafficking organization that worked with the FARC to flood the United States with cocaine, offering a $15 million reward for information leading to his capture.

Venezuela’s Foreign Minister at the time, Jorge Arreaza, called the charges unfounded. The Information Ministry did not respond to a request for comment about alleged financial ties between government officials and Colombian guerrilla groups.

U.S. authorities, speaking on condition of anonymity, said they’ve grown increasingly concerned about how entrenched in Venezuela the Colombian rebels have become.

Venezuela has also tracked the expansion of armed groups from Colombia in its territory, according to Manuel Christopher Figuera, an ex-general and former head of Venezuela’s National Intelligence Service, who fled the country in 2019. Figuera showed Reuters maps he said were produced in 2018 by one of the country’s intelligence agencies showing the purported locations of ELN and dissident FARC operatives in Venezuela and their range of alleged activities, including drug and arms trafficking, extortion, kidnapping and murder for hire.

Reuters was not able to verify the authenticity of the maps, which bore the insignia of the Strategic Center for Security and Protection of the Homeland. Venezuela’s Information Ministry did not respond to requests for comment, and calls to the number listed for the intelligence agency were not answered.

If Maduro’s government is allied with Colombian rebels, the relationship is not always friendly. In March, Venezuela’s military launched an offensive against a group of FARC dissidents in the border state of Apure after Maduro said the group was sent by Colombia to destabilize the country.

Locals in Apure, where thousands fled the fighting, told Reuters they’ve watched the guerrillas steadily consolidate power over the past five years, expanding their illicit business activities while largely assuming the role of law enforcement. A local rancher said they have even waded into economic regulation – telling farmers what they can charge for cheese and beef.

“They are the government,” the rancher said of the rebels. Apure’s governor did not respond to requests for comment.

Indigenous Venezuelans say they, too, have had their lives upended by the guerrillas, whom they’ve dubbed “rubber boots” for their tall, black footwear. In mineral-rich Amazonas state, more than a dozen tribal leaders told Reuters that the rebels in recent years have ramped up illegal mining of gold and coltan, a mineral found in cell phones.

In March, leaders from three tribes filed a complaint with the state human rights office alleging “a large number” of indigenous Venezuelans have been “enslaved and extorted by an irregular group of Colombians,” identified as FARC dissidents, who forced them to work in gold mines.

Amazonas’ human rights office acknowledged it had received the complaint, but made no further comment.

Some Venezuelans credit the rebels with keeping their families afloat.

A 42-year-old corn farmer in Apure who asked to not be named for fear of retribution, said he hasn’t seen his older brother since the FARC forcibly recruited him eight years ago. But every month without fail, he said, his brother calls their mother and sends $120, money he and his elderly parents depend on to survive.

In Zulia, a teacher who asked to be identified only by his first name – Armando – said boys are scarce in his high school because so many are working for the ELN on coca farms or at border crossings extorting bribes from migrants and traders.

Armando understands the lure of drug money. He said he, too, began harvesting coca for the ELN in 2017 to supplement his $3-a-month teaching salary. He has no plans to stop.

“You feel shame,” he said, “but you see food for your children in each leaf you pick.”

Enough PKRC but can be increased if need arises, say Minister

Amazon to pay shoppers hurt by others’ products, does not admit liability