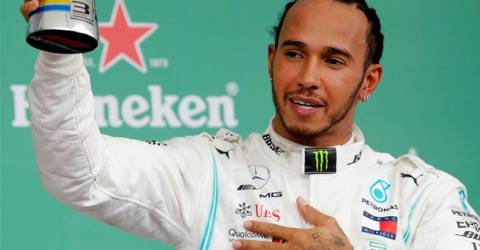 SPIELBERG: The 70th Formula One season started after a near four-month coronavirus delay on Friday but some things haven’t changed – Lewis Hamilton (pix) and Valtteri Bottas topped both practice timesheets for the Austrian Grand Prix.

The British driver took his Mercedes, repainted black in a sign of the team’s commitment to diversity, around the 4.318-kilometre Red Bull Ring in 1 minute 4.304 seconds with team-mate Bottas under 2 tenths of a second slower.

Hamilton has used the extended break to speak out on social issues including the Black Lives Matter campaign.

But with racing resuming from Sunday, he will now turn his attention back to the business of securing a seventh world title, equalling Michael Schumacher’s record.

Sebastian Vettel was fourth in the second session as he starts his final season with Ferrari with younger team-mate Charles Leclerc only ninth.

However, little can be taken from practice sessions with teams often disguising their true pace with tyre choice and fuel loads ahead of qualifying on Saturday.

Daniel Ricciardo was fifth for Renault, Lando Norris took sixth for McLaren and Max Verstappen settled for eighth with Red Bull, though he was third in the first session.

F1 should have started mid-March with the Australian Grand Prix but the global pandemic led to the postponement or cancellation of the first 10 season races.

A revised calendar is now starting with an Austrian double-header concluding July 12 and then the Hungarian Grand Prix a week later. All races are behind closed doors and subject to a strict health protocol.

F1 still hopes to hold a season of around 18 races, down from the original record high of 22, though there are no events yet confirmed beyond the September 6 Italian Grand Prix. – dpa