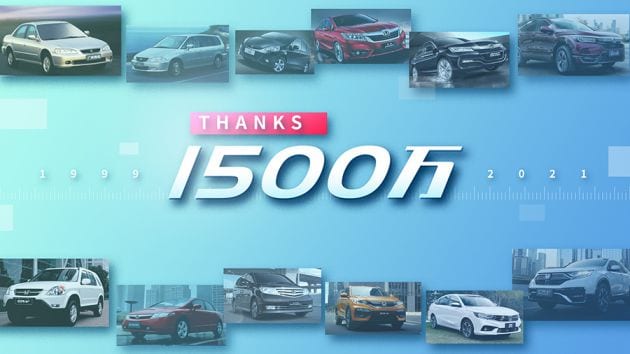 Honda began selling cars in China in January 1999, and after 22 years and six months, the company has announced that its cumulative automobile sales in the country has reached the 15-million-unit mark.

According to the Japanese automaker, this is the fastest of any region for Honda’s global automotive sales. The company also noted that cumulative hybrid vehicle sales in China reached the 500,000-unit mark, which is managed to achieve in four years and seven months since the start of sales in 2016.

Honda’s first products in China are familiar global models such as the Accord and CR-V, but it didn’t take long for exclusive models developed specifically to fulfill the needs of local customers to make their debut. An example of this is the China-exclusive Crider launched in 2013, which was meant to fill the gap between the Civic and Accord.

In 2016, sales of Honda hybrid vehicles begin in China with the introduction of the Accord equipped with the company’s Sport Hybrid i-MMD system. In the years since, more models were launched, and the brand currently offers nine hybrid models. More recently, cars like the CR-V PHEV, which is Honda’s first plug-in hybrid model in China, entered the line-up, with others arriving after.

Honda operates in China through two joint ventures, namely GAC Honda Automobile based in Guangzhou, Guangdong province and Dongfeng Honda Automobile located in Wuhan, Hubei province. The former was established in 1998 and began production of the Accord, while the latter came on the scene in 2003 and began selling the CR-V.

With both joint ventures up and running, in 2006, Honda’s cumulative automobile sales in China reached one million units, and in 2018, that figure increased to 10 million units. Sales volume continued to increase at a rate of around 1.5 million units annually from that point to where we are today, with 15 million units sold.

While the models aren’t shared between both joint ventures, they do overlap in terms of technologies, albeit looking noticeably different. For instance, the Breeze and CR-V are actually sister models, as are the Inspire and Accord.

Muffuletta, trapizzino and puccia: Do you know the difference between these Italian sandwich styles?...