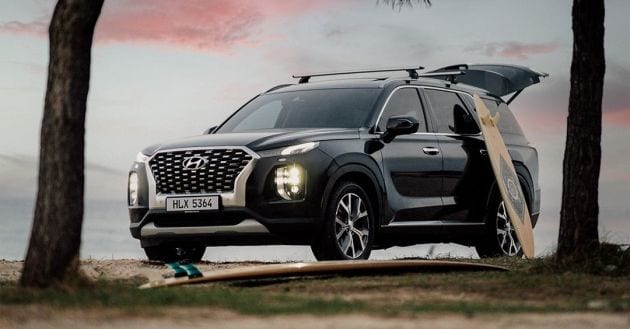 The Hyundai Malaysia Facebook page posed a question earlier this week; do you miss outdoor activities? A great deal of us surely do, though more to the point, the assortment of images posted depict the Palisade, which has been announced by Hyundai-Sime Darby Motors (HSDM) in March to be set for launch in Malaysia sometime this year.

Transmission as standard is an eight-speed automatic gearbox, with engine outputs sent to either the front, or all four wheels courtesy of its HTRAC AWD system. Gearbox operation is through a shift-by-wire ‘gearstick’, featuring automatic park logic that shifts the transmission into ‘P’ when the engine is switched off. For ferrying passengers and luggage, the Palisade can accommodate 510 litres in its luggage compartment when all seven seats are in place, or if you tend not to need more than half that, folding down the third row of seats will yield 1,297 litres. The seven-seater version of the SUV has a seating layout of 2-2-3, where the middle row gets a pair of captain seats with heating and ventilation.

Still, yet to be confirmed are the SUV’s equipment specifications, though the seven-seater SUV can be expected to boast of a 12.3-inch TFT instrument cluster for the driver, and an eight-inch Display Audio infotainment unit with support for Android Auto and Apple CarPlay. Certain markets have the option of the larger, 10.25-inch infotainment unit, though its inclusion for Malaysia remains to be seen.

There will be plenty of kit to please the crowd in the Palisade; there is a vent diffuser for the air-conditioning in order to provide focused, partially diffused or fully diffused airflow for rear passengers, along with seven USB charging outlets. There are also 16 cupholders, Driver Talk intercom for communicating with rear passengers, and a Rear Sleep Mode that allows the driver and front passenger to continue listening to audio while cutting the feed to the rear occupants.

Right-hand-drive versions of the Palisade for markets such as Malaysia, as well as Australia and New Zealand will be built on the same production line as the native LHD version at the automaker’s plant in Ulsan, Korea.

Thailand bans use of cryptocurrencies as a method of payment