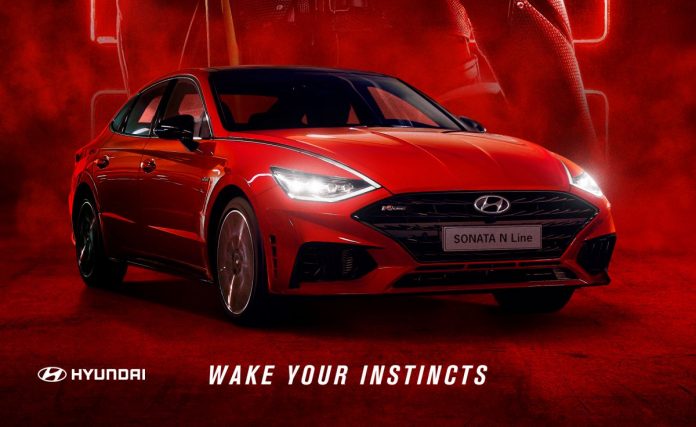 The Hyundai Sonata N Line will be on screen in Snake Eyes: G.I. Joe Origins, the action film that will make its global debut on July 23.

Malaysian actor and Crazy Rich Asians star Henry Golding is Snake Eyes, who is welcomed into an ancient Japanese clan called the Arashikage after saving the life of their heir apparent. In the movie, Snake Eyes is seen in a high-octane car chase sequence in a Sonata N Line on a Tokyo highway (a rather strange combo, I know), during which the sedan performs a “pulse pounding 180-degree drift”.

The Sonata N Line is one of three Hyundai vehicles in the movie. The others are the sharp-bodied Hyundai Elantra, which is driven by Scarlett, representing the Joe’s in this origin story, in a Tokyo castle scene; and the Santa Fe SUV, which makes a brief cameo.

“We are thrilled to partner with Hyundai on Snake Eyes and bring our journey to life with exhilarating action sequences using stylish and sporty cars,” said Irene Trachtenberg, senior VP of international marketing partnerships at Paramount Pictures.

“Snake Eyes: G.I. Joe Origins offers a thrilling opportunity to watch and feel the sportiness and agility of the Sonata N Line in action, prior to the launch of the limited edition,” said Thomas Schemera, global chief marketing officer and head of customer experience division at Hyundai.

Yup, there will be special edition Sonata N Line models commemorating its appearance in the film. Starting in the third quarter of 2021, the “Night Edition” will be available in the US market and “The Black” edition in Hyundai’s domestic South Korean market. More details on these SEs will be revealed at a later date.

First seen in September 2020, the N Line version of the eighth-generation Sonata gets a sportier exterior and cabin, larger 19-inch alloys, quad exhaust tips and a 2.5L turbo-four with 285 hp/422 Nm, paired to an eight-speed dual-clutch automatic gearbox.

Tesla’s $1 trillion worth a double bonanza for Musk