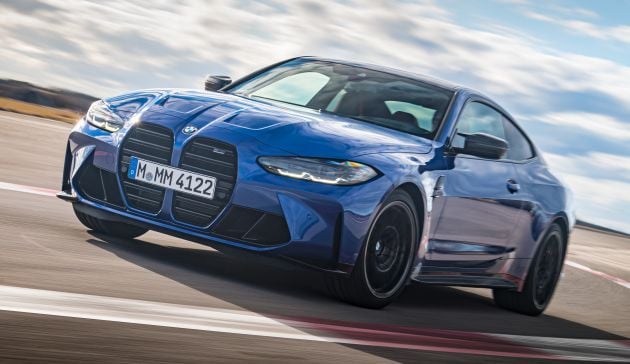 While it was launched here late last year along with the G80 M3, the first customer units of the G82 BMW M4 Coupe are being delivered to their lucky customers now. We get the latest M4 in uprated Competition spec for RM715,664 on-the-road without insurance (or RM761,597 with a five-year, unlimited-mileage warranty and a five-year service package).

That’s a lot of money for a car, but it looks really good value next to the Thai-spec M4 Competition, which was announced in March for 9,999,000 baht (RM1.28 million). However, they now get a base option that seems to be designed for the enthusiast – how does a six-speed manual and 20% smaller price tag sound?

While Competition cars come only with the eight-speed M Steptronic automatic transmission with Drivelogic, as seen on the M5 and M8, the base model can be optioned with a six-speed manual gearbox, and this 6MT car is now available in the kingdom for 7,999,000 baht (RM1.024 million). That price is for the standard three-year warranty and free service package – 110,000 baht (RM14,080) extra to bump it up to five years for both.

Back to Malaysia. Based on a recent walkaround video done by BMW dealership Wheelcorp Premium Setia Alam on a car that has just arrived, the contents of the optional Innovation Package, seems to have changed since launch.

The glass sunroof has been ditched in favour of the standard carbon fibre roof on the coupe (a convertible surfaced earlier this year), while the Style 825 M wheels have been removed in favour of the standard Style 826 M rollers – they are still forged and still measure 19 inches in front and 20 inches at the rear. Still exclusive to the pack are the Laserlight headlamps and carbon fibre interior trim.

Crucially, the Innovation Package adds on Driving Assistant, which consists of autonomous emergency braking, lane keeping assist and blind spot monitoring. Yup, all those are optional, and it doesn’t even include adaptive cruise control, a feature that Perodua buyers can have for just RM70k.

What do you think of the new M4’s performance and looks. Is the new face growing on you yet? A quick survey in our office group chat show that some opinions on those nostrils have softened with time. And what about this 480 PS, 6MT beast, BMW enthusiasts?

Other Sports: Soccer-Chelsea hero Havertz in dreamland after tough season

Garupa with fermented beans: Tasty fish with a kick