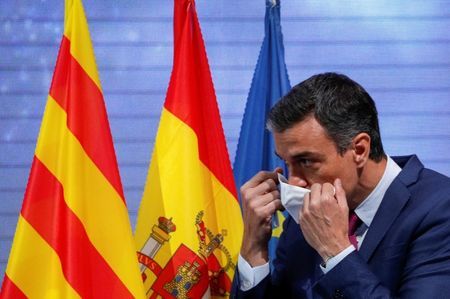 BARCELONA/MADRID (Reuters) – Spanish Prime Minister Pedro Sanchez is poised to pardon the jailed leaders of Catalonia’s failed 2017 independence bid, betting the time has come for a political gamble that he hopes will ultimately cement his legacy.

Opinion polls show about 60% of Spaniards – as well as all the country’s main opposition parties – oppose freeing the nine politicians and activists sentenced to long terms in 2019 for their role in the chaotic and at times violent events that triggered Spain’s biggest political crisis in decades.

But by acting in the coming days, Sanchez believes he can use an accelerating economic recovery and a successful COVID-19 vaccination programme to ride out the ensuing tide of unpopularity and repair any collateral damage before national elections due in 2023.

“Everything points to Tuesday” for Sanchez to approve the pardons, a source familiar with his thinking told Reuters.

A source in his Socialist Party confirmed that a decision by the prime minister, who has repeatedly made clear his ambition to dampen Catalonia’s secessionist drive through negotiation rather than confrontation, appeared imminent.

“It’s worth the political cost now and not a month before the elections. We have to focus in the next two years on the economic issues,” a government source added.

Sanchez also hopes to repair Spain’s international image, which suffered significant damage from the confrontations of 2017 and length of the leaders’ prison sentences, which ranged from nine to 13 years, the government source said.

Deputy Prime Minister Carmen Calvo has said cabinet talks about the request for pardons – whose most prominent beneficiary would be Oriol Junqueras, elected to the national and European parliaments while behind bars – should conclude by the first week of July at the latest.

Sworn in last month, Catalonia’s new regional government is pro-independence, but it also favours negotiation with Madrid while ruling out new unilateral moves towards secession.

Sanchez, who has advocated the idea of pardons as a means of fostering dialogue, is due to meet its leader Pere Aragones this month to resume bilateral political talks.

A second Socialist Party source said announcing the pardons before that meeting would give the central government an upper hand in those talks.

A Catalan government source also said Sanchez’s announcement could come beforehand, as he might want to avoid any impression that he and Aragones had agreed the pardons during the talks.

Meanwhile, two sources said, critics of the pardons within Sanchez’s party have been weakened by the defeat of a potential rival in a primary election in Andalusia and by the main opposition People’s Party (PP) strong rejection of any amnesty, which have made the Socialists rally around the prime minister.

Sanchez also received an unexpected boost on Thursday when the chairman of main business lobby CEOE said he welcomed the pardons if they helped normalise relations with Catalonia.

Aragones, whose leftist Esquerra Republicana de Catalunya party has been a key backer of Sanchez in Spain’s parliament since the prime minister was elected in late 2019, told Reuters the potential pardons would be a welcome first step in talks on authorising a referendum on independence.

But they would not buy Madrid any concessions, he said, also demanding amnesties for the over 3,000 people subject to legal proceedings over the events of 2017.

“The Spanish government knows that we will not give up on an amnesty and the right of self-determination,” he said.

Other say pardons could cost the separatist cause further momentum and damage its international profile.

Granting them would be “a smart political decision by the Spanish government… because they would dismantle us politically”, tweeted Elisenda Paluzie, chair of separatist organisation ANC, whose two predecessors are among the nine leaders in jail.

Football: Soccer-Filling Ronaldo void at Juventus does not weigh on me – Kean