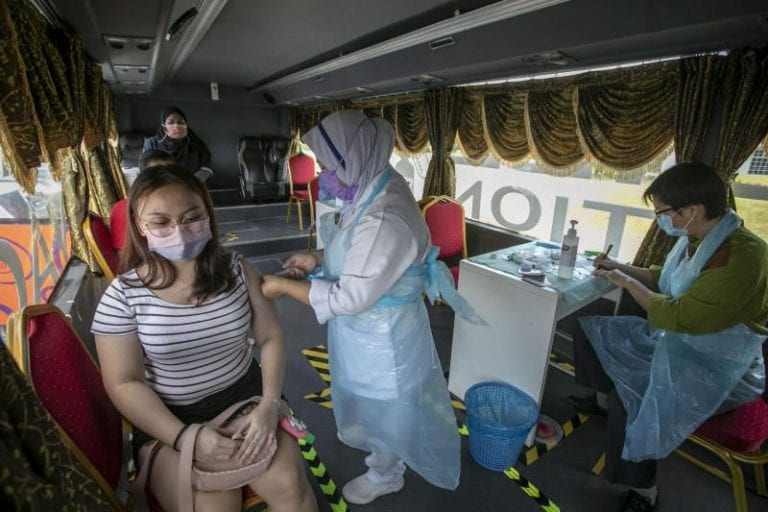 PETALING JAYA: Malaysia’s Covid-19 outbreak grew by 44% in the seven-day period from July 11-17 compared to the week before, but vaccinations continued to speed up to new highs.

* There were 78,660 new cases recorded from July 11-17, the biggest number of weekly cases since the start of the pandemic.

* Only Labuan saw a drop in cases compared to the week before. All other states and federal territories recorded increases on a weekly basis.

* The country’s vaccination rate continued to climb. The number of jabs dispensed grew by 23.5% compared to the previous week, and reached a new record on July 15, with 460,123 doses administered on that date.

* Terengganu, Putrajaya, and Penang had the biggest weekly percentage increase in cases.

One of the things health authorities and experts measure is the infection’s reproduction number, called R0 (pronounced as “R naught”).

The R value refers to the number of people that a person who has the coronavirus will infect.

If the R value is 1 for example, it means that on average, one infected person will spread Covid-19 to one other individual.

An R value higher than 1 means that the number of cases will increase.

If the R value falls – especially below 1 – the disease will eventually stop spreading as not enough new people are being infected to sustain the outbreak.

Malaysia’s R value went up from early March but fell since May 23 to below 1 on June 6. It went up to 1 again on June 28 and has since been on an upward trend.

* Penang, Sabah and Kedah had the biggest increase in the number of vaccine doses for the week.