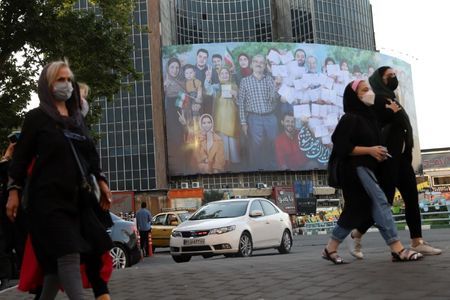 (Reuters) – Iran’s president appealed to voters to set aside their grievances and take part in a presidential election on Friday that record numbers of people are expected to boycott due to economic hardship and frustration with hardline rule.

President Hassan Rouhani, a relative moderate, urged Iranians on Thursday, as campaigning ended, not to let the “shortcomings of an institution or a group” keep them from voting, an apparent reference to the Guardian Council.

“For the time being, let’s not think about grievances tomorrow,” Rouhani said in televised remarks.

Supreme Leader Ayatollah Ali Khamenei has already urged people to turn out in large numbers, saying that would help avert foreign pressures on the Islamic Republic.

Official opinion polls suggest turnout could be as low as 41%, significantly lower than in past elections.

In addition to anger over the disqualification of prominent moderates, grievances include economic hardship exacerbated by U.S. sanctions as well as official corruption, mismanagement, and a crackdown on protests in 2019 triggered by rising fuel prices.

The accidental shooting down of a Ukrainian plane in Iran in January last year which killed 176 also undermined public trust.

“Voting would be an insult to my intelligence,” 55-year-old Fatemeh said, declining to give her second name for fear of reprisals. “Raisi has already been selected by the government regardless who we vote for.”

Prominent dissidents inside and outside the country have called on fellow Iranians to snub the election, including exiled former crown prince Reza Pahlavi and opposition leader Mirhossein Mousavi, under house arrest since 2011.

On the other hand, many leading reformists have rallied behind Hemmati, including former President Mohammad Khatami, arguing that a massive boycott would guarantee a Raisi win.

Under the Iranian Constitution, the supreme leader, elected for life and responsible for choosing six of the 12-member Guardian Council, holds most of the powers of the state.

Polling stations open at 7 a.m. local time and close at 2 a.m. on Saturday. The interior minister told state TV that due to the Covid-19 pandemic, voting will take place outside at 67,000 sites across the country, with social distancing and the donning of face masks. Voters are asked to bring their own pens.