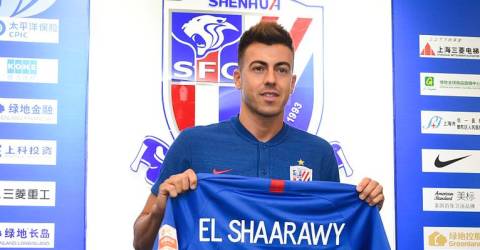 SHANGHAI: Former AC Milan and Roma star Stephan El Shaarawy (pix) failed to even make the bench for Shanghai Shenhua on Thursday amid reports the Italy international has been suspended by the club.

The 27-year-old winger was nowhere to be seen as Shenhua beat Roberto Donadoni’s Shenzhen 3-2 in the Chinese Super League.

El Shaarawy, who has 25 caps and four goals for Italy, reacted badly to being subbed in a 2-0 defeat to champions Guangzhou Evergrande in Saturday’s CSL opener.

He headed for the dressing room following his substitution in the 55th minute rather than sitting on the bench, earning a one-match suspension from Shenhua, The Paper in Shanghai said.

Shenhua have given no information on his whereabouts.

El Shaarawy’s future at the club is now in doubt, a year after arriving in China from Roma for a reported 16 million euros. He has scored four goals in 14 matches.

In a derby later Thursday, Giovanni van Bronckhorst’s tough start to life as a coach in the CSL continued as Guangzhou R&F were thrashed 5-0 by Fabio Cannavaro’s Evergrande.

Brazilian duo Anderson Talisca and Paulinho, the former Barcelona midfielder, were both on the scoresheet as Cannavaro’s men made it two wins from two matches.

In contrast, R&F suffered a successive heavy defeat, having lost 3-0 to Shenzhen in their first match of the season.

The CSL kicked off on Saturday, five months late because of the coronavirus pandemic, with all matches taking place behind closed doors in Suzhou or Dalian. – AFP

US forces in S.Korea raise Covid-19 alert amid record infections