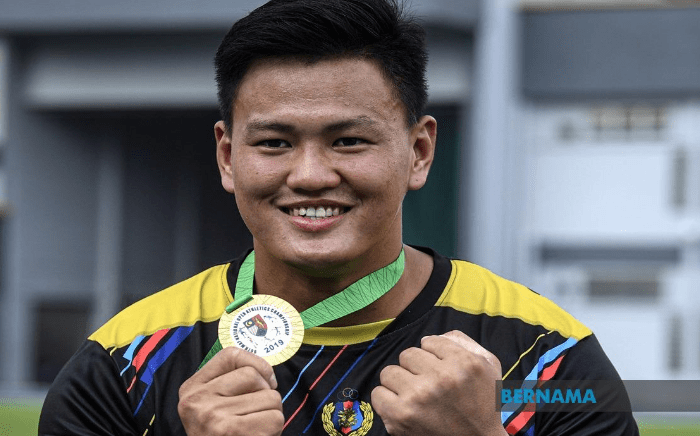 KUALA LUMPUR: After almost a month put under isolation and treatment for Covid-19 infection at the Sibu Hospital in Sarawak since March 16, national hammer throw athlete Jackie Wong is still suffering from the virus infection.

The national record holder for the event with a 67.01 metres (m) record said the latest Covid-19 test samples which were taken yesterday had come back positive.

According to the 27-year-old, despite testing positive, his health has improved over the time with some symptoms such as flu and cough subsiding.

However, the 2019 Philippines SEA Games silver medalist said that his asthma might affect his health condition but he does not require the ventilator.

“Since I was admitted, (at Sibu Hospital) I have been tested seven or eight times. The most recent test was yesterday and in the afternoon the doctor confirmed the result came out to be positive.

“Symptoms like coughing are subsiding. So far, my health has improved but my asthma might make it a bit difficult but it is still under control without the need for respiratory aids,” he said when contacted by Bernama today.

Jackie was the first Malaysian athlete to be infected by Covid-19 and was suspected to have caught the virus while visiting his father, who had tested postive and is also undergoing treatment at the same hospital.

He noted that he had to test negative for Covid-19 in two consecutive tests after this before being allowed to be discharged from the hospital.

“Usually the test is carried out in four or five days depending on my health and with two consecutive negative results, I will be allowed to go home. So, I just have to be patient and pray for the best in the next two tests.

“My strength to be patient and fighting the Covid-19 infection is my family members who are waiting for me to return home. I hope my dad and I will recover soon and we can go home together,” he said.

Earlier, Jackie’s third sample test result on March 28 had tested negative but he had to set aside his desire to return home after the fourth test on March 30 was  positive. – Bernama