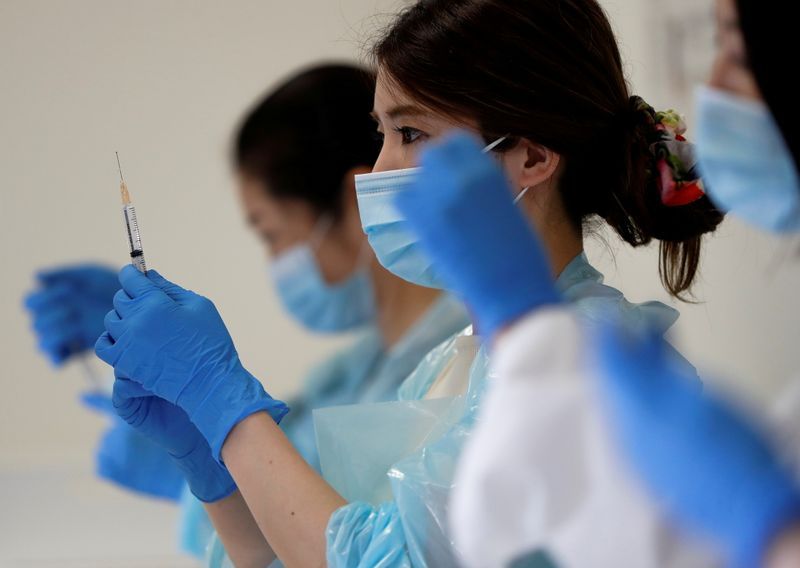 TOKYO (Reuters) – Japanese corporate giants are joining the nation’s COVID-19 vaccination effort ahead of the Olympic Games as the government struggles to meet its inoculation targets amid fears of a resurgence of infections.

Thousands of corporations from Toyota Motor Corp to telecom and investing outfit SoftBank Group Corp are setting up clinics in a massive private-sector vaccination drive which will begin in earnest on Monday.

The campaign, launched with the government’s backing, takes added urgency with the start of the Tokyo Olympics just over a month away and fears that the influx of visitors could cause a resurgence in infections.

So far, more than 2,300 companies have applied to open vaccination centres that will give shots to about 11 million people, mainly their employees, family members and nearby residents.

“Hopefully, vaccination at the corporations will help us speed up the inoculation process,” said Taro Kono, the minister in charge of the vaccine push.

“With the number of applications from the corporations, I think we can reach 1 million (doses a day) by the end of this month.”

Hitting that daily rate will be critical to achieving Japan’s vaccination goals, namely getting shots to all the elderly by the end of July and the rest of the adult population by November at the latest.

Just 16% of Japan’s population have had at least one shot, according to a Reuters tracker, the lowest rate among comparable wealthy economies. The government’s vaccination drive has been hit by manpower shortages and malfunctions in reservation systems.

To speed things up, the government charged the military to set up mass vaccination centres and liberalised rules on who can administer or get the shots.

The latest plan allowing the private sector to join the campaign leverages requirements for companies with 1,000 employees or more to have in-house doctors. Major corporations also often sport their own medical facilities and even whole hospitals that can be quickly switched to vaccination centres.

Some small firms are joining the campaign. James Riney, the founder of venture capital firm Coral Capital, pooled the startups he has backed into a group big enough to qualify to host a vaccination centre.

“Things happen slowly in Japan until they don’t,” Riney said.

Vaccine hesitancy https://www.reuters.com/article/us-health-coronavirus-japan-vaccine-idINKBN2AC0BB is strong in Japan but workplace peer pressure could be even stronger, said Yoshiaki Katsuda, an occupational health expert at the Kansai University of Social Welfare.

“If a staffer has some belief in conspiracy theories or has some strong doubts about vaccinations, if their boss or colleagues get a vaccination, they would be hard-pressed to refuse it,” Katsuda said.

Donbas: Battle in east Ukraine expected to be bloody and decisive