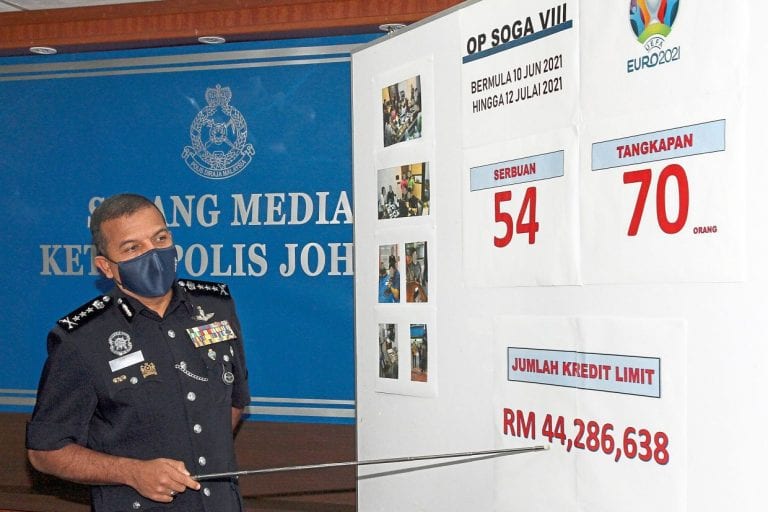 JOHOR BARU: Johor police have scored a crucial “goal” against illegal gambling with the arrest of 70 bookies and stopping bets amounting to more than RM44mil throughout the just concluded UEFA European Championship 2020 tournament.

State police chief Comm Datuk Ayob Khan Mydin Pitchay said police carried out a total of 54 raids under Ops Soga VIII between June 12 and July 12 in several locations across the state, adding that the suspects, aged between 17 and 65, included a woman.

“Police also seized RM42, 535 from the suspects, ” he told a press conference at the state police headquarters here yesterday.

Comm Ayob said the suspects, who were being remanded for between two and four days, were part of gambling syndicates that operated at various premises, including in residential areas, to avoid detection.

“The operation was successful thanks to our intelligence gathering and cooperation from the public, ” he said.

On another matter, Comm Ayob confirmed that police had arrested a man who called himself “Long Tiger” again, this time for allegedly locking up a 21-year-old local said to be his former worker.

He said the suspect, a Rohingya refugee, was picked up in Muar on Monday night.

Police are investigating what business he was involved in.