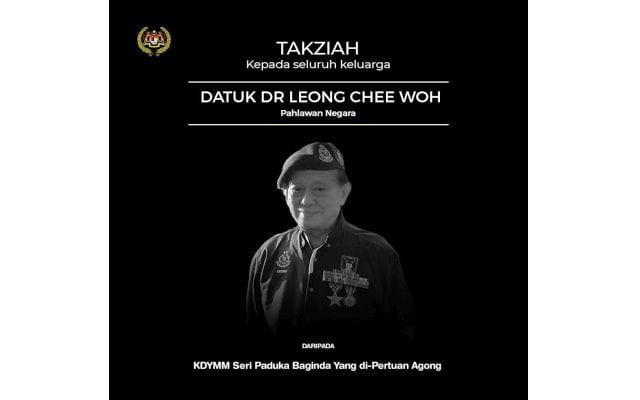 Istana Negara, in a statement on its official Facebook page, said that His Majesty was saddened by the national hero’s death and hoped that his family would be patient and strong in facing this ordeal.

“Al-Sultan Abdullah highly appreciates the late Leong’s service and sacrifices in fighting and ending the communist terrorist insurgency in our country,” it said in a statement Monday (July 19).

Leong died from a stroke at his residence in Seri Kembangan, Selangor. He was 92.

He was appointed to lead the E3F Team or better known as Team F, which was established in 1971 to fight communist terrorists during the second uprising of the Communist Party of Malaya (CPM) from 1968 to 1989 in the peninsula and the insurgency from the Northern Kalimantan People’s Party (PARAKU).

Leong’s F Team squad was pivotal in the laying down of arms by the CPM and signing of the Hatyai Peace Agreement in 1989.

The late Leong was bestowed the Panglima Gagah Berani (PGB) award by the 15th Yang di-Pertuan Agong Sultan Muhammad V in 2017 for his service and courage while serving with the PDRM. – Bernama