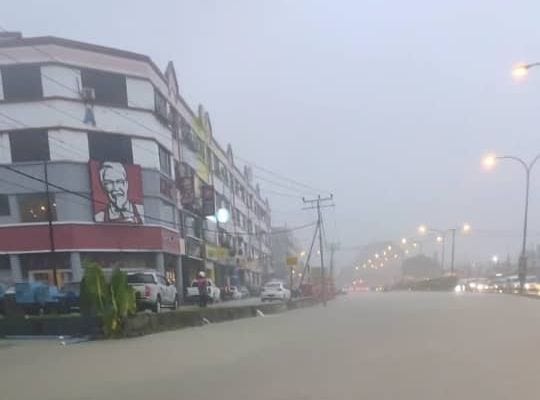 KOTA KINABALU: A downpour that lasted more than four hours wreaked havoc on the suburbs of the state capital, leaving waist-deep water in homes and shoplots even at locations not normally known to flood.

Hundreds of motorists were caught in jams and city residents whose homes did not have flooding problems previously found water gushing into their homes and compounds after rain that started at about 2pm on Friday (June 18).

Based on postings on social media, numerous incidents of flooding were reported in Kota Kinabalu and its suburbs. There were also reports of water levels rising in the neighbouring Penampang and Putatan districts.

According to some residents, floodwaters entered some homes in Kg Likas, an area not known to have any flooding problems.

The area has also been under a two-week enhanced movement control order (MCO) since last week.

Many sections of Jalan Tuaran, Jalan Teluk Likas and Jalan Tun Fuad Stephens main roads were reported flooded, with motorists stuck in jams that built up after office hours.

According to witnesses, floods also hit shops in the Kolombong light industrial area, as well as nearby places including Inanam and Manggatal.

Most residents affected by the flash floods, especially in the Likas area, said such floods were never seen in their locality before.

He also urged the authorities to improve the drainage system to avoid future flash floods.

There was no immediate need for any evacuation as light rainfall continued into the night.

Sandbags and soldiers as Ukraine leader gives interview under siege