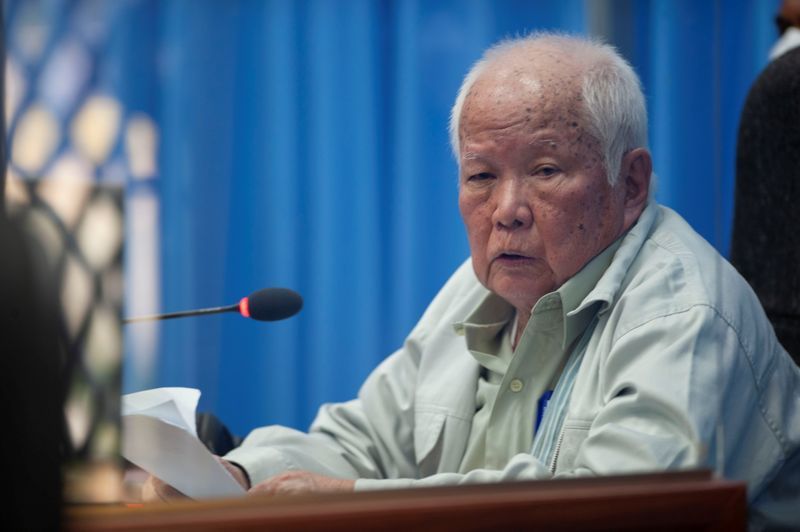 PHNOM PENH (Reuters) – The last surviving leader of Cambodia’s Khmer Rouge regime on Thursday denied involvement in genocide and being responsible for crimes against humanity, in one of his final appearances before an international tribunal.

Khmer Rouge era President Khieu Samphan, 90, was speaking during his appeal of a 2018 guilty verdict that was one of only a few rulings against those deemed “most responsible” for the deaths of an estimated 1.7 million people from 1975-1979.

None of the cadres have admitted being behind the atrocities of the “killing fields”, which wiped out a quarter of Cambodia’s population.

“I categorically refute the accusation and the conviction that I had the intention to commit the crimes,” Khieu Samphan told the court.

“No matter when it was, any crimes, be they crimes against humanity in any forms, no matter it was the genocide against the Vietnamese, the murders, I have never committed them.”

He said his duty as president was ensuring national sovereignty and independence from Vietnam, whose invasion toppled the ultra-Maoist regime.

Most of the victims died of starvation, torture, exhaustion or disease in labour camps, or were bludgeoned to death in mass executions.

Guilty verdicts have so far been reached by the Extraordinary Chambers in the Courts of Cambodia against three former top regime members, but several have died while on trial or before indictments were made.

Pol Pot, the architect of the “Year Zero” revolution that sought to create a peasant utopia, died in 1998.

Khieu Samphan appealed his conviction on evidentiary and procedural grounds. He said the Cambodian people should know he was not to blame.

“Many years of sitting as the defendant, at the end of this long case, it is important for me to inform you and especially inform the Cambodian people that I have never wanted to commit a crime against my compatriots or against anyone else,” he said.

“No matter what you will decide, I will die in prison, I will die always remembering the suffering of my Cambodian people.”