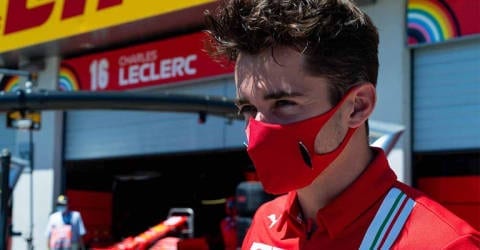 SPIELBERG: Charles Leclerc (pix) admitted he had given in to a selfish impulse on Sunday when he apologised to Ferrari and Sebastian Vettel for the first lap crash that removed both drivers from the Styrian Grand Prix.

The Monegasque driver attempted to pass the four-time champion down the inside of Turn Three, but rode the kerbs and bounced back to hit his car, wrecking Vettel’s rear wing.

A Safety Car was deployed while the two Ferrari drivers went back to the pits for repairs, but both retired soon afterwards.

“I apologised to Seb and, obviously, excuses are not enough at times like this,” said Leclerc.

“I am just disappointed in myself. I’ve done a bad job today and I let the team down.

“It’s a tough time for the team. We don’t need it and the team doesn’t need that and I put all the thoughts of the team in the bin. I’m very sorry, but it’s not enough.

“I can only be sorry, even though I know it’s not enough. I hope I learn from this and we will come back stronger in the next races.”

The luckless Vettel, who is in his final season with Ferrari, said he was “very surprised” by Leclerc’s lunging move.

“I was fighting two other cars and we were already three cars together going into Turn Three.

“There was no space and there was not much that I could have done differently.”

Ferrari had brought a package of upgrades to the race, having struggled for pace at the season-opening Austrian Grand Prix, and team boss Mattia Binotto admitted they had failed.

Having decided to dump Vettel, the team face an early-season crisis to reverse their form following Sunday’s dismal embarrassment.

They have struggled in qualifying at both season opening events, although Leclerc finished a fortunate second at the curtain-raiser last week when half the field retired.

Binotto, in his second season as team boss, conceded that their car cannot deliver the pace needed to challenge at the front of the field where Mercedes on Sunday reeled off a one-two triumph.

“This is painful, to finish a race like this,” he said.

“It’s the worst conclusion to a very bad weekend for us, but not the time to blame or accuse people. It’s time to unite. There is not much to say to the drivers.” – AFP