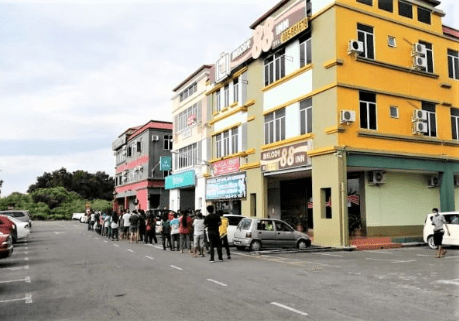 The financial aid, targeting the B40 and M40 groups, was rolled out by the government to relieve the burden of the rakyat during the Covid-19 pandemic.

A ground check carried out yesterday showed that most of the crowd had gathered outside the bank’s premises as early as 7am, but some applicants seemed to be dejected as their applications were either rejected or the cash is not yet available in their accounts.

Both BSN’s branches in Permyjaya and at Miri Waterfront areas were crowded.

The financial aid is expected to be distributed the end of this month and May.

They were seen advising the crowd to practise social distancing while queuing.

Meanwhile, Miri police chief ACP Lim Meng Seah when contacted said a better system should have been worked out by the bank to better manage the distribution of the financial aid.

“We (the police) have contacted the BSN office in Miri and asked them on the best way that they can arrange to distribute the aid,” he said.