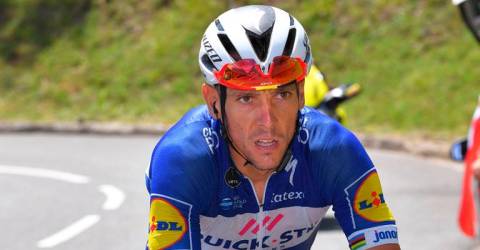 NICE: Belgian veteran Philippe Gilbert (pix) is out of the Tour de France having fractured a knee in one of the dozens of falls that marked a slapdash stage 1 run around the rain-slick roads of Nice.

His loss is a double blow to the Lotto Soudal team as another senior rider, John Degenkolb, was judged to have been too slow by the race referees and was disqualified.

Gilbert is a former world champion and has won multiple major one-day races and had the honour of wearing the Tour de France yellow jersey.

“What a disappointment for us,” said Gilbert, one of Belgium’s best loved sports stars.

The Lotto captain joined the team this season and his loss damages the team’s Tour efforts, but Gilbert reserved his anger for the treatment of his teammate Degenkolb.

“John gave everything, but got zero respect from the commissaires,” he said. “With the rain and all crashes, at least he deserved more respect.”

Several riders have complained about the race being too dangerous on Saturday, and the Astana captain Miguel Angel Lopez was criticised for racing too aggressively, gamely attacking downhill in the rain before smashing face first into a sign post.

“Racing is becoming more competitive and riders are willing to take more risks in order to get that win. It’s a tough sport, if you don’t like it, probably retire,” he said on British television.

Stage 1 of the tour was won by Norwegian veteran Alexander Kristoff, who is unlikely however to hold his overall lead over the two category 1 mountains in Sunday’s foray into the low Alps. – AFP