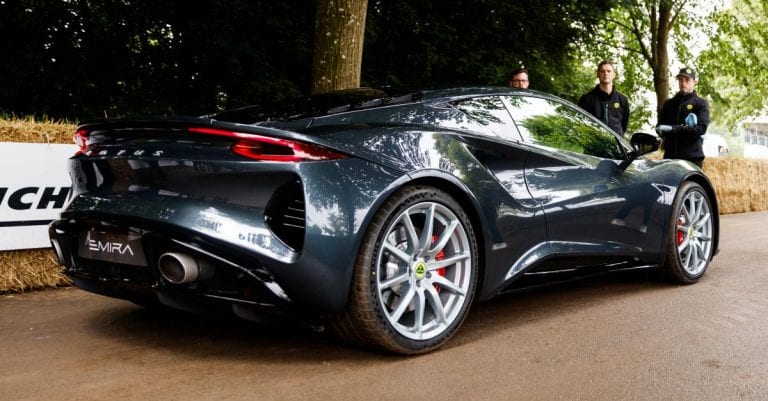 The brand new Lotus Emira has just made its dynamic debut at the Goodwood Festival of Speed over the weekend, participating in its first Hill Climb in front of tens of thousands of enthusiasts.

Lotus was the featured marque of the show this time around, and according to the automaker, the Emira was swarmed with people that crowd control measures had to be implemented as soon as the gates opened at 7 am. Of course, the sports car was also driven by the Duke of Richmond, Charles Gordon-Lennox, with Lotus Cars managing director Matt Windle in the passenger seat.

Displayed alongside the Emira were the Evija (last year’s Goodwood debutant), an Elise Sport 240 Final Edition, as well as the track bike developed in part by Lotus Engineering for British Cycling.

Windle said: “Our stand staff didn’t stop talking to people about the Emira all day. So many had watched the livestream on Tuesday, love the way the car looks inside and out, and wanted to share how thrilled they are to see the transformation that is taking place at Lotus. We had an amazing day at Goodwood and are looking forward to the rest of the weekend.”

To recap, the Emira rides on the new and improved Lotus Sports Car Architecture, and is available with two engine options. At launch, it gets the familiar Toyota-sourced 2GR-FE 3.5 litre V6 engine, mated either to a six-speed manual or a torque converter automatic. Outputs are said to be in the region of 400 PS and 430 Nm of torque, allowing it to sprint from 0-100 km/h in under 4.5 seconds before hitting the 290 km/h Vmax.

By mid next year, a second petrol engine will be available, and that is a 2.0 litre four-cylinder engine supplied by Mercedes-AMG. The four-potter will be specially tuned to deliver that characteristic Lotus trait, and it will be paired with AMG’s dual-clutch transmission as well. Both engines are transversely mounted, sending drive exclusively to the rear wheels.

Production of the Emira will take place at a brand new facility in Norwich, called the Lotus Advanced Structures. It’s also the same facility that will produce the limited-run Evija hypercar. If you’re wondering why the Emira had such a strong pull factor at the show, perhaps the starting price point of under £60,000 (RM350k) had something to do with it.