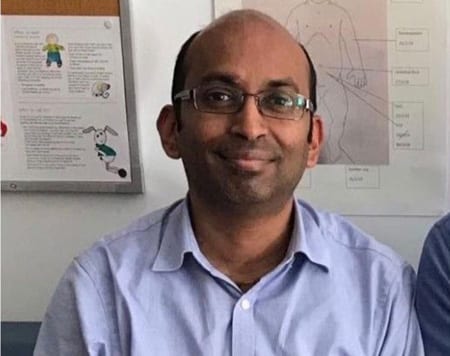 KUALA LUMPUR: A Malaysian neonatology specialist consultant based at Birmingham Women’s and Children’s Hospital was among the Covid-19 fatalities in the United Kingdom where the number of deaths is now close to 20,000.

According to Birmingham Women’s and Children’s NHS Trust in a tribute post on its official website on Friday, the 48-year-old Dr Vishna Rasiah leaves behind his wife, Liza, and daughter, Katelyn. However, his place of origin in Malaysia has yet to be ascertained.

“He was highly-regarded across the Midlands for his role as clinical lead for the regional neonatal network,” according to the post, Friday.

Neonatology is the branch of medicine concerned with the treatment and care of newborn babies.

The hospital’s chief executive Sarah-Jane Marsh described Dr Vishna as an amazing doctor, leader, colleague and friend who was passionate about the care of babies and their families.

“Losing him in such a cruel and unfair way will be too much to bear for many of us, in particular anyone involved in neonatal care, and of course, his beautiful wife and daughter,” she said.

Meanwhile, the hospital’s medical director, Dr Fiona Reynolds said the passing of Dr Vishna was a great loss and broke the hearts of people around him.

“It’s heart-breaking that we have lost someone as talented, dedicated and respected as Vish. His loss will not only be felt by his friends and colleagues at our hospital, but by many across the Midlands who worked alongside him for so long,” said Dr Reynolds.

In the tribute post, Dr Vishna’s wife, Liza, said her husband was a much-loved son and brother to their families in Malaysia and Trinidad.

“His whole family meant the world to him, and he absolutely doted on Katelyn. Vish loved his work; to him, it was so much more than a job, and his colleagues were a part of our family too.

“He treated every patient and family he cared for as his own; I couldn’t have been prouder of him,” she said. — Bernama