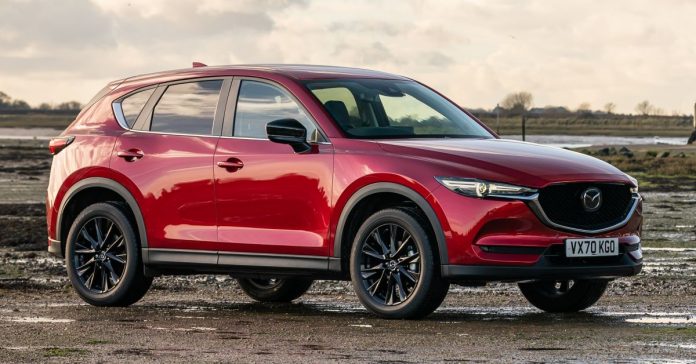 According to a report by Australia’s carsales, the next-generation Mazda CX-5 is heavily tipped to be the first model to debut the company’s new rear-wheel drive platform and electrified inline-six engines.

It wasn’t explicitly stated that the SUV will be the first to get these technologies, although Mazda Australia marketing director Alastair Doak did imply as such. “We can’t really answer specific model stuff, but I guess… what segment around the globe is the biggest? The answer would be the SUV,” he said.

Meanwhile, Mazda Australia managing director Vinesh Bhindi did name the CX-5 during his presentation, saying, “Mazda continues to invest in high-efficiency combustion engines, with SkyActiv-X, and the new-generation straight-six engine family that will power our new-generation, large-platform products, which is CX-5 and above.” Given the popularity of the CX-5, it would make sense that Mazda prioritises the development of the next-gen SUV, although we don’t have an exact launch timeline, if true. Previous reports suggest a 2022 debut for Mazda’s new large-platform models, which does fit in well with Mazda’s most recent strategy as well as its prior preview.

The platform will underpin five hybrid models, five plug-in hybrid models and three full electric vehicles (EVs) from 2022 to 2025. The next-generation CX-5 and Mazda 6 are part of this plan, and while the company has yet to confirm which will come first, the former will likely be at the front, based on what’s been mentioned above. As for the inline-six engines, Mazda said last November that there will be three versions – petrol, diesel and SkyActiv-X versions – with support for electrification in the form of a plug-in hybrid or a 48-volt mild hybrid.

“The new six-cylinder is a mild-hybrid, so it will have… basically it’s a 48-volt system… and like other brands– like Mercedes and others – it will produce a bit of power and torque to assist the engine,” said Doak.

The outputs of the inline-six range remain unknown, but a previous leak suggests the 3.0 litre SkyActiv-X petrol version with mild hybrid tech makes 286 PS (282 hp) and 340 Nm of torque. Meanwhile the 3.3 litre turbodiesel is claimed to provide 286 PS (282 hp) and 600 Nm.

A plug-in hybrid version is also likely, incorporating powertrain components from Toyota, which it is currently in partnership with. Vehicles based on the new platform will also benefit from the Mazda Co-Pilot 1.0 suite that features a host of driver assist systems, including semi-autonomous driving functions.

Design-wise, the only thing we can go on for now are photos of a camouflaged prototype spotted near Mazda North American Operations’ HQ in Irvine, California, which were submitted by a reader to The Fast Lane in May.

The vehicle in question looks rather similar to the outgoing model, but there are some differences like a more subtle grille, slimmer LED headlamps, a squared-off tailgate and a bonnet that has prominent lines and a distinct bulge. Less obvious changes include larger quarter windows and rear doors, while the fuel door is placed further away from the left taillight – a plug-in hybrid model should have its charger on the other side.

CTOS says it provides credit information, does not blacklist anyone

Twitter stars to dabble with getting fans to pay