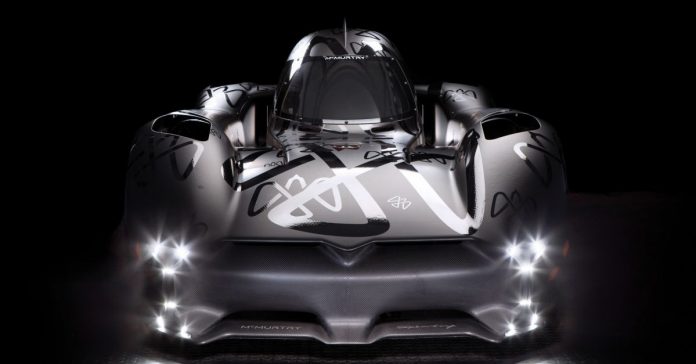 The fast-growing population of electric cars will soon be joined by the McMurtry Speirling, a track-only, prototype racer-styled electric car that is set to make its debut at this Goodwood Festival of Speed this week.

Conceived by British outfit McMurtry Automotive that was founded by David McMurtry in 2016, development of the first concept vehicle got underway from 2017, eventually named Speirling, or ‘thunderstorm’ in Irish.

Little else has been divulged by the company about the concept car, except to say that it will be a track-only machine boasting “downforce on demand” to operate “far beyond the boundaries of conventional aerodynamic performance.”

No specifications or dimensions have been revealed, though the Speirling appears to sport somewhat toy-like proportions – a very short wheelbase with wheels that are more than half the car’s overall height – with its sports prototype-like design. The narrow glasshouse suggests a single-seat arrangement, and six LEDs on each side make up the car’s frontal lighting, while a quartet of LEDs appear to serve as tail lamps.

There is no large rear wing as one would expect of a dedicated track car such as this, though its rear diffuser is considerably sized and located beneath what appears to be a pair of radiators. Viewing the car directly from the rear shows a pair of large passages for airflow between the rear wheels and the centre of the car.

The Speirling is touted as a “British invented, engineered and built ‘no rules’ track car, indicating its intent as something other than to enter sports prototype racing, the cars of which appear to have inspired its shape. After the public showing of the Speirling at Goodwood this week, McMurtry says it will embark on a programme of record attempts to “show its true motorsport potential.”

What do you think, folks? What records might be behind the McMurty Speirling’s crosshairs?

Delaying dementia: VR games may be the next big thing

What’s Next for Japan After Shinzo Abe?