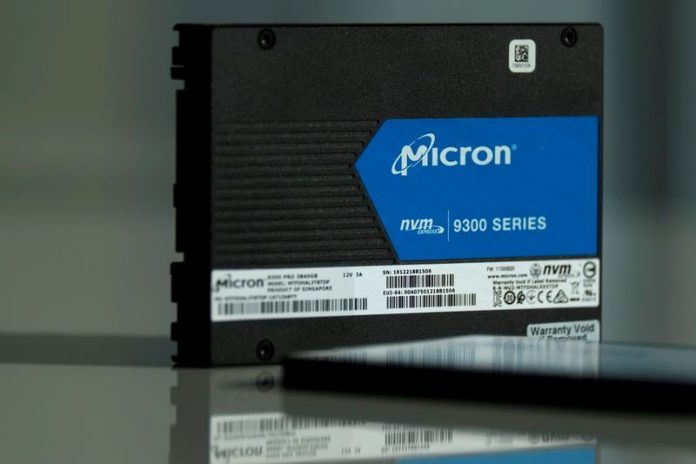 The chipmaker forecast current-quarter revenue of $8.2 billion, plus or minus $200 million, while analysts on average were expecting $7.87 billion, according to IBES data from Refinitiv.

Micron makes NAND memory chips that serve the data storage market and DRAM memory chips that are used in data centers, smartphones and other computing devices. It has benefited from the pandemic-induced global shift toward remote work as demand for laptops and other electronic devices soared.

In prepared remarks, Micron Chief Executive Sanjay Mehrotra said the company expects industry-wide supplies of both kinds of chips to remain tight until the end of next year, keeping prices high.

“We believe Micron’s strong financial performance will continue cross-cycle, and over the long term, our revenue growth will outperform the broader semiconductor industry,” Mehrotra said.

The company’s revenue for the third quarter ended June 3 rose 36% to $7.42 billion, beating estimates of $7.24 billion, according to IBES data from Refinitiv.

Excluding items, the company earned $1.88 per share in the quarter, above estimates of $1.72.

The company also said it will sell a plant in Lehi, Utah, to Texas Instruments Inc. Micron said it expects to get about $1.5 billion for the plant, $900 million of which will be in cash and $600 million of which will be in the value of tools it can either sell to outsiders or move to its other factories. Micron had said it would sell the Utah facility, which it shared with Intel Corp under a joint venture formed nearly a decade ago, as part of a broader technology strategy shift https://www.reuters.com/article/us-micron-tech-strategy/micron-to-put-utah-chip-factory-up-for-sale-as-it-shifts-strategy-idUSKBN2B82WO.

Micron also said that its capital expenditures for fiscal 2021 would rise above $9.5 billion, partly driven by pre-payments as it starts to acquire extreme ultraviolet lithography (EUV) machines from Dutch maker ASML Holding NV . The machines are necessary for making the most cutting-edge chips but can cost more than $100 million each.

(Reporting by Akanksha Rana and Niket Nishant in Bengaluru and Stephen Nellis in San Francisco; Editing by Devika Syamnath and Lisa Shumaker)