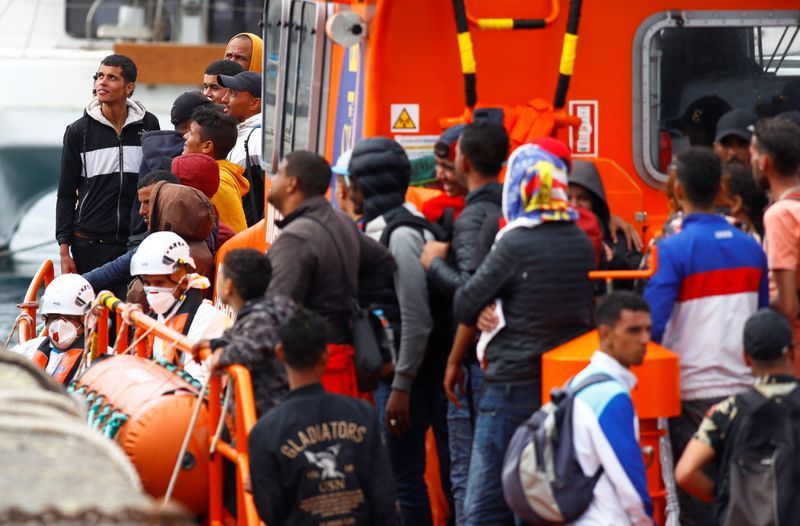 GRAN CANARIA, Spain (Reuters) – Spain’s sea rescue service on Wednesday rescued around 100 migrants trying to reach the Canary Islands in rickety boats from north or west Africa amid a surge in arrivals that have more than doubled so far this year from 2020 levels.

The migrants were rescued off three boats and all appeared to be in good health, a sea rescue service spokesperson said.

On Tuesday the service rescued 31 migrants on a boat off the island of Lanzarote, with one of them dying shortly after. The migrants told emergency services the boat had left African shores with around 60 people on board and that some had fallen into the sea during the journey, the spokesperson said.

A total of 8,222 migrants arrived in the Canaries illegally between Jan. 1 and Aug. 15, compared to 3,364 in the same period of last year, according to Interior Ministry data.

Over 23,000 migrants arrived in the archipelago in 2020, which marked an eight-fold increase from 2019 and was one of the busiest years for such crossings in the past decade, overwhelming authorities and sparking tensions on the islands.

Earlier this year, authorities opened several camps for migrants in the Canaries. They were devised as a more stable solution after the 2020 influx, when hundreds of people stayed for weeks at a crammed, hastily improvised dockside camp, where conditions were harshly criticised by rights groups.

(Reporting by Borja Suarez in Gran Canaria and Joan Faus in Barcelona, editing by Andrei Khalip and Rosalba O’Brien)

Other Sports: Olympics: Athletes should travel to Tokyo with confidence – IOC chief