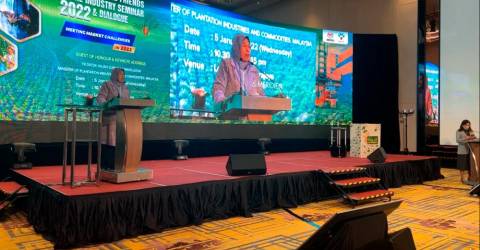 NETIZENS have been surprised by a viral video clip of a speech by which Plantation Industries and Commodities Minister Zuraida Kamaruddin claimed that orang utans “would kill people first”.

The minister appeared to make this inaccurate claim as a part of a method to struggle fireplace with fireplace, with the intention to fight growing criticism towards the native palm oil business.

In a speech that happened on Jan 5, Zuraida talked about that whereas she was on her umrah pilgrimage, the minister came upon that Arab faculties nonetheless have books that are casting a destructive mild on palm oil, as a result of “kita bunuh orang utan (we kill the orang utan)”.

The minister was in all probability referring to claims by each worldwide and native wildlife conservation organisations that palm oil plantations are exacerbating deforestation and destroying the habitats of already endangered species, together with orang utans.

The speech then instantly drives off a cliff, as Zuraida then claims that in Malaysia, if a human was to see an orang utan, the usually docile animal would kill the human first. She additional went on to claim that the Wildlife and National Parks Department (Perhilitan) has procedures to take away orang utans, as a substitute of killing them.

No one is certain the place the minister discovered this, nevertheless it may very effectively be from a kind of Planet of the Apes motion pictures that she mistook as a documentary.

Netizens instantly started to level out the failings in her claims. Besides the apparent one about orang utan behaviour, others identified that as orang utans are present in Borneo, they arrive beneath the purvey of the Sabah Wildlife Department and the Sarawak Forestry Corporation, not Perhilitan.

Other netizens joked in regards to the reality that her speech additionally talked about lions, a species that is barely native to sub-Saharan Africa and India, not Malaysia.

You can watch the speech right here:

Twitter launches competition to find biases in its image-cropping algorithm

Mexico holds referendum on whether to probe ex-presidents