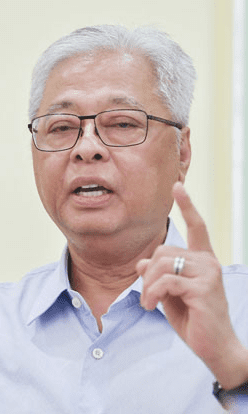 He said this was informed by Women, Family and Community Development Minister Datuk Seri Rina Mohd Harun at the Special Meeting of Ministers on Implementation of the Movement Control Order (MCO) yesterday.

“The issue being raised is the insufficient amount of food given, with claims that the total amount came up to only RM35 worth of food.

“There are individuals who had posted these allegations on their social media accounts.

“The minister (Rina) has informed that the ministry receives contributions from non-governmental organisations and various other parties, but the value and total cost of
the contributions are not stated.

“It can be RM30, RM50 RM70, RM100, RM200, it’s up to them. The minister had also stated that the food baskets are not from the ministry,” he said at the MCO daily media conference here yesterday.

On April 17, it was reported that about 1.1 million people nationwide will benefit from the distribution of food aid baskets by the Welfare Department throughout the Movement Control Order (MCO).

The department said the distribution of the food baskets would involve 279,223 households affected by the MCO.

Meanwhile, asked on measures taken to contain the number of Covid-19 infections at Selangor Mansion, which reportedly is still showing high numbers, Ismail Sabri said the situation there is under control as the area was now placed under the Enhanced Movement Control Order (EMCO).

“We will discuss this as ultimately, it is the Health Ministry (MOH) that will advise us before any decision is made. If we have to extend (the EMCO) due to the rising number of cases, then I will announce it,” he said.

On the response of foreign embassies on account that many of their citizens were housed in the area, Ismail Sabri said the Foreign Ministry was always in touch with diplomatic representatives to ensure their citizens’ welfare is being taken care off.

On whether the government would consider allowing Employees Provident Fund (EPF) counters or kiosks to be opened for less computer-savvy contributors to make withdrawal applications, he said the matter will be raised during the next meeting attended by Finance Ministry representatives. — Bernama