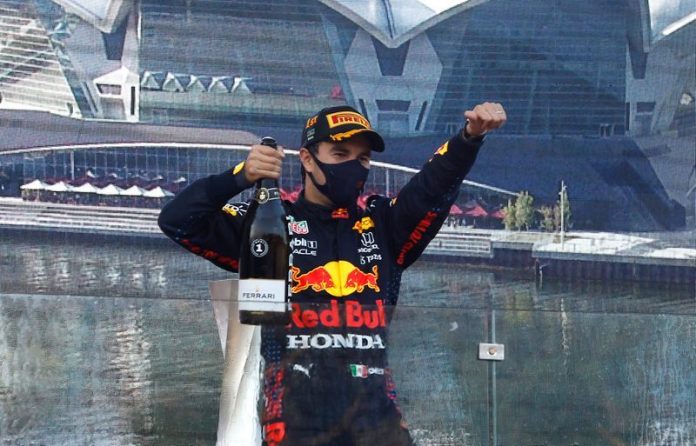 The race was red-flagged when Verstappen crashed five laps from the end, the Dutch driver clambering out of the wrecked car and kicking the rear left tyre in fury with his hopes in tatters.

Baku’s street circuit then provided another crazy twist at the standing re-start when Mercedes’s seven-times world champion Hamilton lined up second, with two laps remaining, and looked set to take back the overall lead.

Instead the Briton got it all wrong — his prospective points haul disappearing as he locked up and ran down the escape road in the sprint to the first corner. He finished 15th.

“I’m so sorry, guys,” Hamilton said over the radio.

The bonus point for fastest lap was not awarded because Verstappen, who set it, did not finish.

“Normally Baku is pretty crazy,” said Perez, who had two previous appearances on the podium in Baku with now-defunct Force India. “I have to say sorry to Max, it would have been incredible to get that one-two for the team.

“But at the end, it was a fantastic day for us. We were close to retiring the car but luckily we managed to finish the race.”

Perez, now third in the standings, was ordered to stop the car moments after the chequered flag with the team concerned about an hydraulics issue.

Verstappen watched as his team mate took the top step of the podium for the second time in his career. He won in Bahrain last year with Racing Point before the move to Red Bull.

The race put tyre supplier Pirelli in the spotlight with Vettel’s team mate Lance Stroll also crashing out at speed on lap 31 when his car’s left rear suddenly went on the main straight.

(Reporting by Alan Baldwin in London, Editing by Hugh Lawson and Clare Fallon)