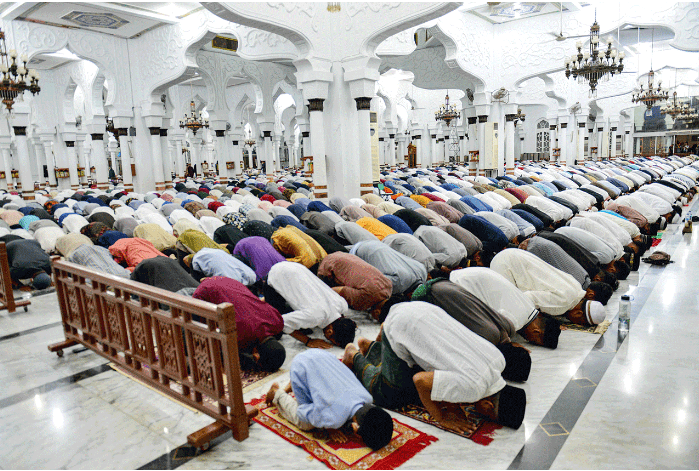 The virus has upended life around the planet as nations try to stop the spread of the disease that has so far claimed nearly 190,000 lives, infected close to 2.7 million people and hammered the global economy.

Ramadan spirits have been dampened by movement restrictions on hundreds of millions of Muslims from Southeast Asia to the Middle East and Africa, with bans on prayers in mosques and large gatherings of families and friends to break the daily fast – a centrepiece of the month.

But despite the coronavirus threat, clerics and conservatives in many countries including Bangladesh, Pakistan and Indonesia – the world’s largest Muslim-majority nation – have pushed back against social distancing rules, refusing to stop gatherings in mosques.

Several thousand people attended evening prayers on Thursday at the biggest mosque in the capital of Indonesia’s conservative Aceh province, and there were similar scenes at many sites in Pakistan.

The World Health Organisation has called for a stop to some Ramadan activities to lower the risk of infections, and authorities in several countries have explicitly warned of the threat from large religious gatherings.

There have already been explosions of coronavirus cases from three separate Islamic congregations in Malaysia, Pakistan and India since the virus first emerged late last year in China.

Distancing measures and the severe economic impact of the pandemic have also meant many charitable activities during Ramadan, especially food distribution and other donations, have been hit hard.

Salah Jibril, an unemployed Palestinian man who lives with his wife and six children in a cramped two-bedroom apartment in the Gaza Strip, said he was not sure how his family would cope without Ramadan donations.

“The markets and mosques are closed. The good people who give us money or aid each Ramadan are facing a tough situation,” he said.

“This is the hardest Ramadan we have faced. We don’t know how we will cope.” — AFP