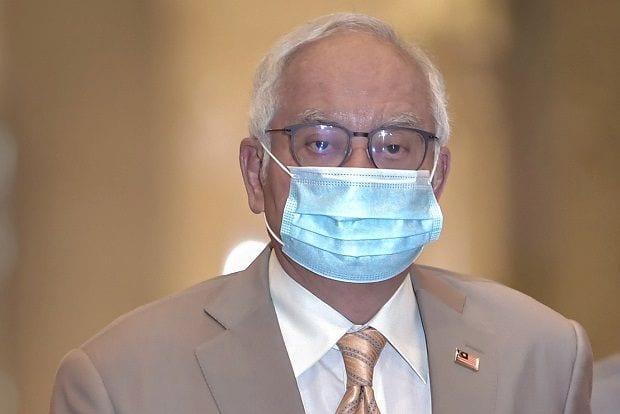 KUALA LUMPUR: Former prime minister Datuk Seri Najib Razak would stand to lose everything he owns including his political standing if the bankruptcy proceedings against him are allowed to continue, says his lawyer Tan Sri Dr Muhammad Shafee Abdullah.

He said it would be an irreparable damage to the Pekan MP if the court did not allow a stay on its order for Najib to settle the RM1.69bil in additional income tax arrears and penalties to the Inland Revenue Board (LHDN).

On July 22 last year, the High Court ruled that Najib must pay LHDN the amount after allowing the LHDN’s application to enter a summary judgment against him.

“He would lose his pension, his properties would be auctioned in order for all this to be executed. It will never be reversible,” Muhammad Shafee said in his submission during a hearing for a stay via Zoom here on Friday (June 11).

The lawyer said his client, who has been in politics since 1976, would lose his right to contest in elections, adding that LHDN had not justified the “astronomical” amount that they demanded from his client.

“LHDN has not shown where this money comes from. There is a serious error on the computation,” he said.

Muhammad Shafee said the matter will be going through appeal at the appellate court as well as the Special Commissioner of Income Tax (SCIT).

“We are only asking for a stay until certain things are resolved,” he added.

In his reply, Senior Revenue Counsel Norhisham Ahmad said nothing had been done by the defendant in order to discuss the payment since the summary judgment was entered last year.

He contended that there was no need for LHDN to review the tax assessment as the summary judgment was already obtained.

“It is normal that once we obtain the judgment, we have to proceed with the execution. We have not served the notice of bankruptcy (on Najib) until Feb 4 this year as we waited for a proposal to resolve the issue,” Norhisham said.

Refuting any “political interference” in the case, Norhisham said LHDN treated Najib’s case the same as any other taxpayers.

Justice Ahmad Bache fixed Monday (June 14) to deliver his decision via email on the stay application.

On June 25, 2019, the government through LHDN filed the suit against Najib seeking payment for a total of RM1.69bil, with interest at 5% a year from the date of judgment, as well as cost and other relief deemed fit by the court.

It also said that Najib was given 60 days to pay the tax, together with the 10% increase, but had failed to do so.

On July 22 last year, the High Court ruled that Najib had to pay LHDN RM1.69bil in additional tax and penalties for the period 2011 to 2017, after allowing the LHDN’s application to enter a summary judgment against Najib.

A summary judgment is when the court decides a particular case summarily, without calling witnesses to testify in a trial.

Najib is appealing against the High Court’s decision on the July 22 summary judgment and the appeal would be heard at the Court of Appeal on June 16.

US midterm elections: Who won, who lost and what it means so far

5 Easy Make Ahead Lunches for Family Home for the Holidays