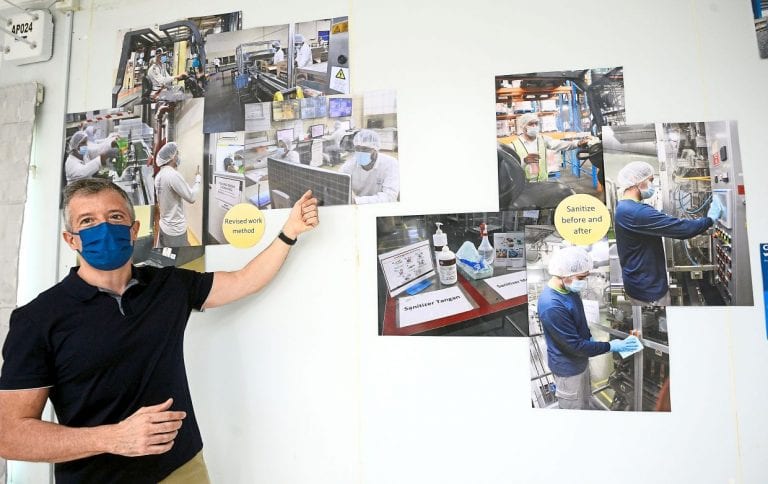 SHAH ALAM: Since October last year when Covid-19 cases in the country saw a spike in numbers, Nestle (M) Bhd

has conducted more than 300,000 RTK Antigen swab tests for its employees.

This equates to about 12,000 tests a week involving about 5,000 of its employees at six manufacturing plants and one distribution centre in the country.

In its canteens, tables have transparent partitions separating employees when they have their meals.

Employees also have their own responsibility of wiping their tables and chairs, before and after eating.

Sanitisation of common areas is conducted hourly, with those using certain staircases even having to sanitise their hands as a way to ensure the hygiene of handrails. All these and other Covid-19-related measures have increased operating costs by about RM100mil per year, but Nestle Malaysia chief executive officer Juan Aranols said they are essential during this period.

“Obviously this is a big effort, but again, this is not about cost. This is about keeping people safe and about keeping operational continuity so that the company can run.

“Any cost is small compared to having to stop your production for weeks or months,” he told reporters yesterday during a brief tour of Nestle’s manufacturing complex in Shah Alam, Selangor.

As the number of cases continue to increase, especially with the rise of new variants, Arnols believed the crisis will be here for a while and that companies or factories have do more to contain the virus.

He said that cooperation and engagement with employees is also important, especially at the beginning of the pandemic.

“Obviously it was not easy for the people to get used to this idea of getting swabbed every week or even every day in some cases but again, through engagements and explanations, everybody has been very supportive,” he said, adding that the positivity rate was about 0.1%.

Arnols also said that the company is willing to share its best practices with anyone.

He noted that even the housing conditions of foreign workers employed by its contractors in the supply chains were checked.

“If they are not living in the right conditions, they are very likely to get infected and have an impact on out operations. We need to take responsibility of the entire supply chain,” he said.