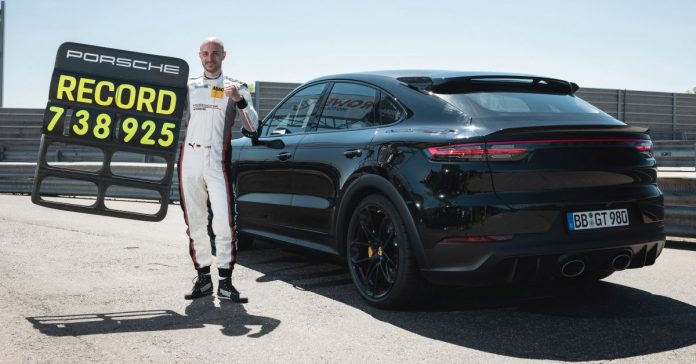 Porsche’s upcoming performance variant of the Cayenne Coupe has broken the lap record for SUVs at the Nurburgring recently, setting a time of seven minutes 38.925 seconds with factory driver Lars Kern behind the wheel. This achievement comes before the new model, which is heavily tipped to be called the Turbo S, makes its full debut.

The new record beats the seven minutes 42.253 seconds laid down by the Audi RS Q8 previously, and places the upcoming model in the vicinity of the BMW M5 as well as the previous-generation 911 Turbo. According to Porsche, a notary public certified the new record in the “SUV, off-road vehicle, van, pick-up” category.

“Over the first few metres of the Nordschleife in this Cayenne, you’re tempted to turn around to make sure that you’re really sitting in a spacious SUV. Its high steering precision and stoically stable rear axle gave me a lot of confidence in the Hatzenbach section,” said Kern.

“It changed direction at lightning speed in the fast curves such as between Hohe Acht and Eiskurve, with no wobble and no tendency to understeer. Even in this technical stretch, the Cayenne is a real driver’s car that is easy to control,” he added.

As before, Porsche isn’t willing to reveal a whole lot about the new performance variant besides that it’s based on the existing Cayenne Turbo Coupe. The record-breaking unit was equipped with a racing seat and roll cage for safety reasons, while the specially designed Pirelli P Zero Corsa fitted to 22-inch wheels will be standard on the production version.

Referring to a previous report, the upcoming Cayenne Turbo S Coupe is said to be powered by an uprated version of the Turbo’s 4.0 litre twin-turbo V8 that delivers 640 PS (631 hp) and 850 Nm. The engine is paired with an eight-speed automatic transmission with all-wheel drive.

Queen wants Camilla to be known as Queen Consort