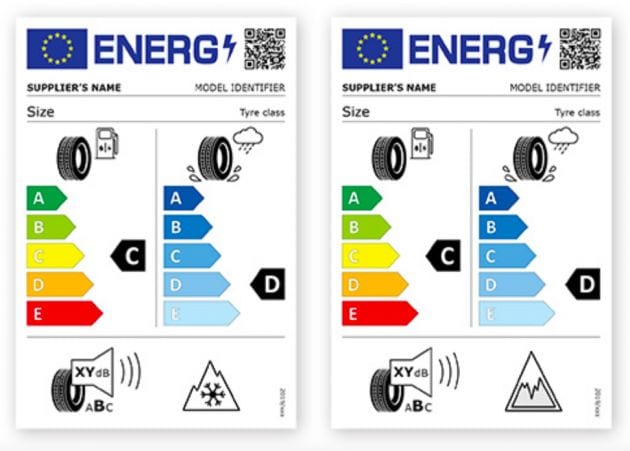 The European Commission (EC) has brought into effect a new set of rules for the labelling of road tyres, which aims to highlight their fuel efficiency, safety and noise performance of new tyres at consumer level from May 1 this year. This is an update of the label that was first introduced in 2012 for car and van tyres, and the new rules dictate that tyres for buses and trucks must be labeled as such, as well.

The new tyre labelling follows the colour-coded classification system used for household appliances such as refrigerators, and various parameters are now graded on a scale of five classes for rolling resistance and wet-surface braking; the latter has now been adjusted from the previous iteration of the scale with six classes. Also included are two categories for external noise (rated in decibels).

The external tyre noise rating relates to the noise produced by a tyre on the outside, when the vehicle on which it is installed passes the observed location. Noise classes range from A (less noisy), to C (most noisy).

A tyre’s performance in those parameters determine how well they perform relative to specific requirements for tyres that are available on the European market, as outlned by Regulation (EC) No. 661/2009 on the general safety of motor vehicles.

There is now also provision for an optional pictogram for snow grip from winter tyres, depicted by what’s called the Alpine symbol, otherwise known as 3PMSF (three-peak mountain with snow flake). This same pictogram will also appear on the tyre sidewall.

A separate pictogram is used specifically for Nordic winter tyres, depicted by an ice stalagmite. To qualify for the pictogram on its label, the winter tyre must pass a specific test for braking on extreme ice. These tyres are only marketed in Nordic countries and should be used in extremely cold winter conditions, said the EC, and these tyres typically do not work well on wet surfaces or in less severe weather conditions, it added.

Standardised tests are used to assess the performance of tyres in all five parameters described on the new label, and only tyres that have performed to a pre-determined minimum level can bear the snow or ice symbol. National authorities are to perform random checks to determine the accuracy of the tyre’s performance levels, said the EC.

The new label is aimed at helping consumers make better informed choice when purchasing tyres, said the EC. Meanwhile, although the wet grip segment is an obvious measure of safety, it “does not go easily hand in hand with the most efficient rolling resistance,” the EC said in the statement.

The new label for a given tyre also features a QR code which allows users to find more information about the tyre chosen on the new European Union database. For stocks of tyres produced before May 2021, car and van tyres that bear the old label may still be sold until the end of 2021.