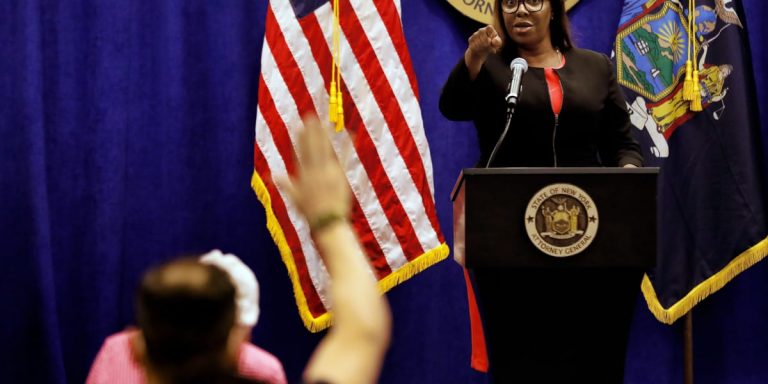 Subscribe to Bull Sheet for no-nonsense daily analysis on what’s happening in the markets, delivered free to your inbox.

New York is investigating whether President Donald Trump’s company falsely reported the value of his assets to secure loans and get tax benefits as claimed last year by Trump’s former personal lawyer and fixer, Michael Cohen.

New York Attorney General Letitia James said Monday that she’s suing to enforce seven subpoenas seeking thousands of documents and testimony from multiple witnesses. They include Eric Trump, one of the president’s sons and executive vice president of the Trump Organization, who refused to show up for a subpoena interview, she said.

The investigation is looking into transactions involving a Trump skyscraper in Manhattan called 40 Wall Street, as well as the president’s highrise hotel in Chicago and a Los Angeles golf club. James said a particular focus of the investigation is an obscure property called Seven Springs on 212 acres outside New York City.

Cohen triggered the probe after he handed Congress a series of Trump financial records from 2011 to 2013, New York said in a filing in state court in Manhattan. The investigation is looking into whether Trump inflated the value of assets to secure favorable terms for loans and insurance, as well as whether he devalued other assets to avoid taxes, according to the filing.

James “has not concluded its investigation and has not reached a determination regarding whether the facts identified to date establish violations of any applicable laws,” her office said in one of the court filings.

Trump attorney Alan Garten said in an email that the complaint is “simply a discovery dispute over documents and the like.”

“As the motion papers clearly state, the NYAG has made no determination that anything was improper or that any action is forthcoming,” Garten said. “We will respond to this motion as appropriate.”

The dispute comes as Trump is fighting subpoenas for his tax records and financial documents in a separate grand jury investigation led by the Manhattan district attorney.

In the attorney general’s case, the Trump Organization has claimed for months to be cooperating while refusing to produce documents on invalid grounds, James said in a press release Monday.

New York said in the court filing that one area of focus is valuations of the Seven Springs property in Bedford, New Castle and North Castle in Westchester County. James says the valuations were apparently used to claim about $21.1 million in tax deductions for donating a conservation easement for the 2015 tax year.

The disputed subpoenas have been met with “various unfounded and overbroad privilege assertions,” according to the court filing. Some of the Trump Organization’s claims relate to attorney-client privilege, though New York argues they don’t apply.

Eric Trump is president of Seven Springs LLC, according to the filing.

“Eric Trump’s categorical refusal to appear is unlawful, and he should be compelled to testify,” James said in the court filing.(Updates with comment from Trump Organization lawyer)

–With assistance from Jordan Fabian.