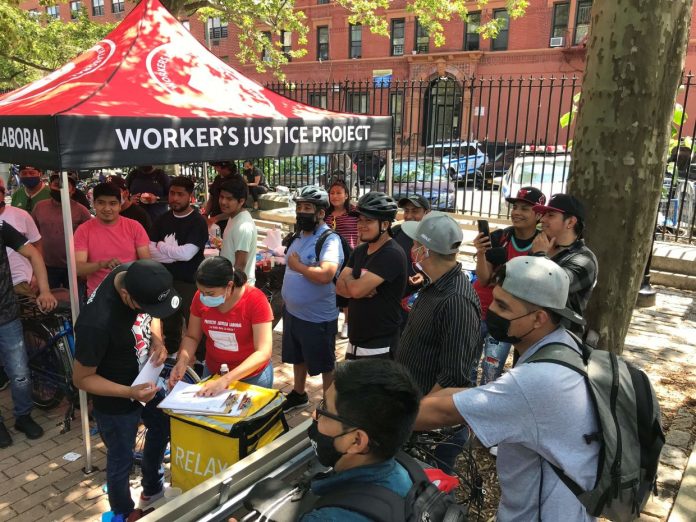 New York’s legions of food delivery men and women – who were declared essential workers during the pandemic but have no on the job access to bathrooms, health insurance or a minimum wage – are mobilising for the first time to demand better working conditions.

The 80,000 “deliveristas”, overwhelmingly Hispanic immigrants who zip around the Big Apple on electric or other bikes come rain, snow or shine, are following the example of other “gig economy” workers such as Uber drivers in Britain who won the right to unionise in May after being recognised as “salaried workers”, in a world first.

In just a few months, “Los Deliveristas Unidos”, the first movement of independent riders for food delivery apps, has gained more than 1,000 members and over 13,000 Facebook followers and set up numerous WhatsApp chats across New York City.

The group has held large protests outside city hall and, with the help of the Worker’s Justice Project and several councilors, managed to get the municipal legislature to debate six bills that would improve their conditions.

“We demand improvements. Life on the street is hard. One is exposed to insecurity, accidents, robberies, injustices, discrimination,” said 38-year-old Guatemalan deliveryman and group co-founder Gustavo Ajche at a recent demonstration.

Another Los Deliveristas Unidos leader, Jonan Mancilla, said the delivery workers wanted to earn the state minimum wage of US$15 (RM62.38) an hour.

“We want to be respected,” said the 33-year-old from Mexico.

Several riders told AFP that most of the applications they work for – including Grubhub, Doordash, Seamless, Uber Eats, Instacart, PostMates, and Caviar – do not pay them by the hour, but by delivery.

The delivery workers say that sometimes apps or restaurants keep part of the tips and that they have to travel long distances for just a couple of dollars.

They also complain that companies do not help them if they get injured and that they don’t cover expenses for their bike or the insulated bag they use to transport food.

“Sometimes restaurants don’t let us in the bathroom and we have to start looking for somewhere. That makes us lose a lot of time and deliveries,” said 27-year-old Orquidea Paz, a rare female delivery worker and mother-of-four from Mexico.

Her husband, also a “deliverista”, says he works 15 hours a day, seven days a week.

“I don’t rest because I have a family to feed,” Aristeo Policao, 32, told AFP.

The workers also say their bikes sometimes get stolen. Recently, 200 of them registered their bicycles with police, while the Worker’s Justice Project provided many of them with GPS devices that help locate the vehicles.

The riders want the city to do more to combat the theft of electric bikes, which cost around US$1,850 (RM7,694) – a fortune for these immigrants who typically don’t have papers or speak English.

“Food delivery was one of the most essential jobs in the pandemic, but it is also the one with the fewest protections.

“Even working 12 hours a day, seven days a week it is impossible to cover daily expenses to survive,” and “applications do not want to be held responsible,” he added.

The bills currently being considered would grant the riders access to restrooms at restaurants, set minimum travel payments and force apps to reveal the breakdown of tips.

It would also establish a weekly wage, cover the cost of the purchase of their insulated bags and allow workers to set a maximum delivery distance without being blocked by apps.

A spokesperson for Grubhub says it doesn’t take a cut of tips but was unable to confirm how many riders it employs and their average salary.

“The health, safety and success of delivery workers across NYC is our top priority and critical to our business. We are overall supportive of the Los Deliveristas Unidos proposals, or already do what is proposed,” the spokesperson said.

Doordash also said through a spokesperson that it pays delivery workers 100% of their tips, that it has met riders several times to hear their complaints and that it is working “to improve working conditions”.

Other apps, including Seamless and Uber Eats did not respond to AFP’s requests for comment on the claims of the “deliveristas”. – AFP