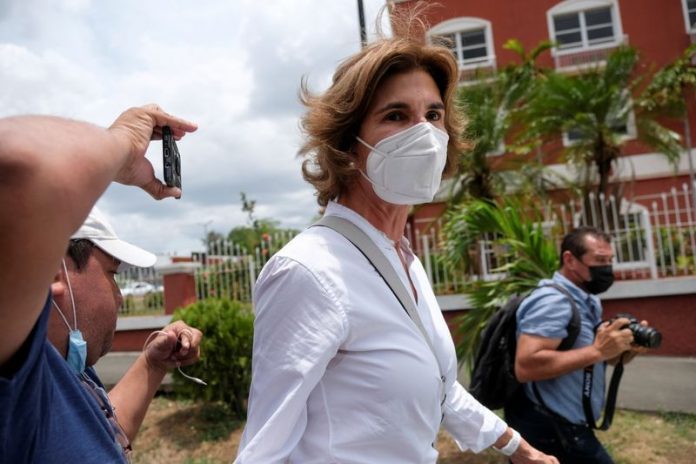 MANAGUA (Reuters) – Nicaraguan police entered the home of opposition leader Cristiana Chamorro on Wednesday after prosecutors sought her arrest for money laundering and other crimes, according to judicial authorities and television footage.

In a statement, Nicaraguan judicial authorities said prosecutors wanted Chamorro detained on suspicion of crimes including “ideological falsehood” and money laundering “to the detriment of the State of Nicaragua and Nicaraguan society.”

Neither Chamorro nor her representatives could immediately be reached for comment.

A judge in the capital Managua put out the arrest order, acceding to the prosecutors’ request, the statement said.

Chamorro is the daughter of Violeta Chamorro, who became president of Nicaragua in a 1990 election, ousting current President Daniel Ortega after his first stint in power.

Chamorro is competing with other opposition figures to run as a candidate in presidential elections in November.

In opinion polls, Chamorro has stood out as one of the most popular opposition figures and touted as a possible unity candidate for the divided opposition.

‘It is our stuff’: shoppers wage right-to-repair revolution

BNM’s supervision of Tabung Haji will not erode rights of minister in charge, Muslims,...

World Architecture Day 2022: How design promotes health in buildings and...