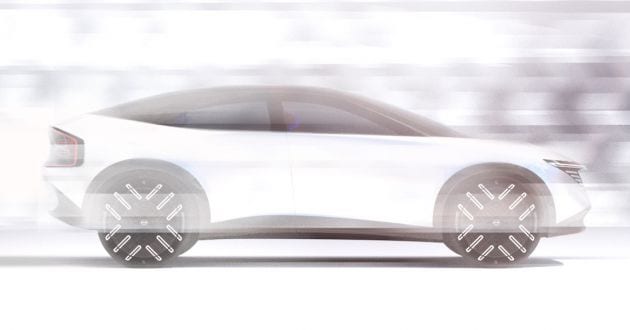 Nissan recently announced its EV36Zero plan, which reinforces the company’s commitment to the United Kingdom despite Brexit, drawing praise from UK prime minister Boris Johnson. The plan is a substantial one, involving the construction of a flagship electric vehicle hub with total investment of one billion British pounds (around RM5.7 billion).

Centred around the company’s Sunderland plant that has been in operation since 1986, the upcoming facility will be responsible for producing an all-new, fully-electric crossover that has yet to be named. The Japanese carmaker did tease the model during its presentation, and the vehicle depicted bore some resemblance to the current Ariya, albeit with a more dynamic roofline and a flat rump.

Nissan isn’t revealing a whole lot for now, but it did say that the unnamed EV is designed for global markets and will be built on the Alliance CMF-EV platform, which is also used by the Ariya as well as the Renault Megane E-Tech Electric. The company is forecasting a production capacity of up to 100,000 units to be installed and the new EV produced in the UK will be exported to other European markets. As it will be a global model, the crossover will also be produced in other locations, which will be confirmed later.

Aside from the new plant and crossover, the latter of which takes up 423 million British pounds (around RM2.4 billion) of the total investment, Nissan also confirmed that Envision AESC will invest 450 million British pounds (around RM2.6 billion) to build the UK’s first gigafactory to supply batteries that will be used in Nissan’s EVs. The new Envision AESC facility will be located on the International Advanced Manufacturing Park (IAMP), adjacent to the Nissan plant. The initial plan is an output of nine GWh, with potential future-phase investment of 1.8 billion British pounds (around RM10.3 billion) bringing that amount up to 25 GWh or even 35 GWh. The plant will help increase the cost-competitiveness of EV batteries made in the UK, including through a new Gen5 battery cell that provides 30% more energy density for better range.

Nissan isn’t the only one with ties to Envision AESC, as its Alliance partner, Renault, also inked a deal with the battery supplier recently to supply the legal entity of Renault ElectriCity, which groups together the French carmaker’s production sites of Douai, Maubeuge and Ruitz in northern France. Both Alliance members have announced that they would standardise and share EV components previously. The EV36Zero plan also encompasses the use of renewable energy for production of both vehicles and batteries. For this, the Sunderland City Council is leading a project that aims to deliver a 100% renewable electricity “Microgrid” that will save 55,000 tonnes of carbon annually.

This will incorporate existing Nissan wind and solar farms, with initial plans suggesting there could be as many as ten solar farms created to generate 132 MW of energy. This project is estimated to be an investment of 80 million British pounds (around RM459 million) and will also see a battery storage system capable of 1 MW using second-life Nissan EV or Envision AESC batteries.